The End of the Dewhurst Era

Will the Senate strip the powers of the next lite guv? 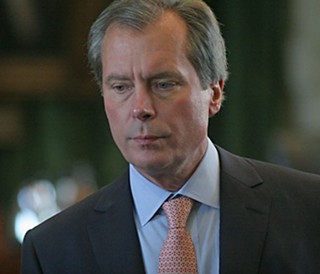 Lt. Gov. David Dewhurst: Soon gone, but his successor may not have much to celebrate, if Senate rumors are true (Photo by John Anderson)

With the primary defeat of Lt. Gov. David Dewhurst, a 12 year era comes to an end in the Texas Senate. However, there's already heavy buzz that, whoever succeeds him, they will be one of the least powerful lieutenant governors Texas has ever seen.

On paper, the governor is the most powerful elected official in Texas. But when it comes to the legislative process, the guv is at best an absentee landlord, and more realistically an occasional visitor. It's the lieutenant governor, in the dual role as president of the Senate, that really rules the roost. But, post-Dewhurst, the powers of that office may be radically curtailed by the members. The thinking is pretty simple: As it stands, the Senate isn't that fond of either major party candidate to fill the post.

If Sen. Leticia Van de Putte, D-San Antonio, becomes the state's first Democratic Lieutenant Governor since Bob Bullock in 1999, then she'll be governing over a majority Republican chamber – conceivably even a Republican super-majority. They are extremely unlikely to give a Democrat the upper hand in the session.

However, on the other side, there are is enough of a bipartisan caucus of the sane that has no desire to see Sen. Dan Patrick, R-Houston, run rough shod over the chamber's operation. While he may have beaten Dewhurst (seen by many as the monotone voice of institutional Republicans), it was scarcely a surprise, or really much of an upset. Patrick was merely picking clean the bones of a career effectively ended when Dewhurst botched his 2012 US Senate run and let Ted Cruz win, and that was truly devastated by his mishandling of the 2012 abortion debate (to quote "The Ballard of Heisenberg", "This homie's already dead, he just doesn't know it yet.") Moreover, there are enough old machine Republicans who dislike and distrust Patrick, and enough Tea Partiers who think he is a simply a band wagon hopper.

There are limits too how much the Senators can cripple their president. However, every session, each chamber sets its rules of operation. Generally, it's just a little tweak here or there. But the right tweak, and the right here and there, can have a massive impact. For example, in 2009 the GOP dumped the rule requiring a two-thirds majority before a significant bill could be brought to the floor – but only in the case of a Voter ID bill. The same thinking applied to the rules appertaining to the lite guv's role on the floor could have similarly significant effects.

It's not like there's no precedent for this kind of polite rebellion. In fact, lege watchers only have to go back to … David Dewhurst. It was a poorly kept secret that Double-D was scarcely master of his own domain. Back in 2011, he was left patroling the rooms outside of his own office while lawmakers thrashed out the unpopular Eissler-Shapiro school finance compromise bill. Then there's the long running piece of Senate lore that has Dewhurst effectively being sent home to think about what he'd done, after a particularly brutal set of crossed words with a senator.

In that instance, the members and the president of the Senate simply reached an understanding. If speculation is true, then this will be much more of a formal codification of the new power structure. One Senate insider said that there has undoubtedly been discussion of this new limiting of the lite guv's role, but that so far no one has volunteered to be Brutus to the incoming Caesar.