If you didn’t manage to early vote last week – and judging from the pathetic numbers thus far, you didn’t – you can still break for lunch or from work this evening and get down to the polls. You might be saving the Dems from nominating a Lyndon LaRouche-ite, or the GOP from … 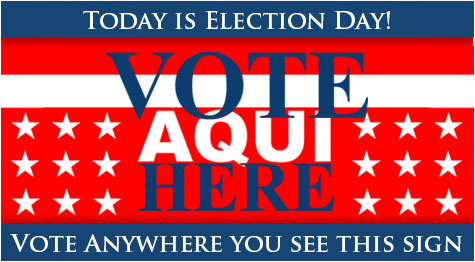 Yes, we know, it’s not the most engaging primary in recent memory. On the Democratic side, we’ve got amateur hour, and on the Republican side, still dominating statewide offices, candidates pandering to extremists in order to continue that domination.

Nevertheless, with so few of us voting, each vote means more. (Early voting broke 3% of registered voters overall, with Republicans accounting for 1.74%.) Democratic voters can prevent the disgraceful ascension of Senate candidate Kesha Rogers, a LaRouche follower with the thousand-yard stare of the conspiracy fanatic, by voting for Dallas dentist David Alameel. For Ag Commissioner, they can choose between non-campaigning Jim Hogan and the perennial sort-of candidate Richard “Kinky” Friedman – who will at least promote marijuana sanity and perhaps bring a few more voters to the fall polls.

If those choices are uninspiring, consider the GOP predicament. For lieutenant governor, they get to choose between an incumbent (David Dewhurst) who has long since abandoned any pretense to core principles, and a radio huckster/con-man (Dan Patrick) who has convinced Tea Partiers he’s one of them – or else sufficiently craven to do whatever it takes to maintain that illusion. Either of them provides a terrific argument for Dem nominee, Sen. Leticia Van de Putte. (Indeed, we suspect more than a few Dems have crossed over to vote for Patrick, in the hopes that plenty of Republicans will bolt in November. )

To tweak the old saying: If you vote today, you’ll have plenty to complain about later. But there are choices here, and they are yours to make. Please vote.

You can find your voting location and other election information here.

The Chronicle endorsements are here.