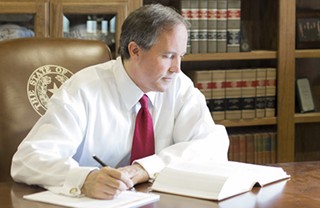 With Attorney General Greg Abbott moving on to either bigger and better things or the unemployment line, there's a vacancy as the state's top attorney. But an admission of financial impropriety by Sen. Ken Paxton, R-McKinney, may be opening him up to an upset loss to Rep. Dan Branch, R-Dallas, in their primary run-off.

Branch and Paxton fought their way past former Public Utility Commission chair and Rick Perry favorite Barry Smitherman in the first round. Paxton came out as the presumptive leader, pulling in 44% to Branch's 33%, but without a majority, and with Branch not backing down, they face each other again on May 27 for the final round.

Paxton has clearly been the super-conservatives' favored son. He recently picked up a $100,000 campaign contribution from the Empower Texans PAC (which basically means it was cash from Tim Dunn, the Midland oil tycoon who is the main underwriter of the conservative pressure group.) He even picked up the endorsement of former US Attorney General (and, in the eyes of many, unindicted war criminal) John Ashcroft yesterday. But then he lost the backing of a police union.

No big deal, right? After all, a US attorney general should outweigh the electoral impact of the Allen Police Association. However, it's not quite that simple a math problem.

The reason for the APA's switch of allegiances is a $1,000 fine handed down by the Texas State Securities Board. On May 2, Paxton signed an order from the board reprimanding him for violating the Texas Securities Act by serving as an unregistered investment adviser for Mowery Capital Management, a McKinney-based investment advisory firm. The order states that, on three occasions between 2004 and 2012, Paxton successfully solicited clients for the firm and was paid for his services. However, it is unclear how many of the new clients were aware that Paxton was getting money from the company.

Paxton's spokesman Anthony Holm wrote this all off as "administrative oversight" and said his candidate was glad that all the paperwork was now corrected. There are still questions floating as to whether Paxton violated Federal securities law, or Rule 1.08 of the Texas Disciplinary Rules of Professional Conduct, relating to conflicts of interest and prohibited transactions

Those apparent conflicts of interest have become a talking point in this campaign. The Dallas Morning News did an extensive breakdown of Paxton's investments, which includes a company that provides video dash-cameras for law enforcement. That firm, Watchguard Video, was accused by a rival, Kentucky-based MPH Industries, of benefitting from a request for proposals for a Texas Department of Public Safety contract so narrowly written that Watchguard was guaranteed to win the bid. While Paxton is only a minority investor, it's just one more insinuation that could drag him down on May 27.

This is all good news from Branch in the volatile environment of a primary run-off. He'd already picked up endorsements from two sitting GOP Congressmen this month: Pete Olson, R-Sugarland, and Bill Flores, R-College Station. They have openly stated that they feel Paxton has to be stopped, with Olson writing that "Now that Sen. Ken Paxton has admitted to repeatedly breaking laws designed to protect Texans from being cheated by unscrupulous investment companies, it is clear we cannot have him as a nominee to be our state’s top law enforcement officer."

Not that Branch is necessarily a better choice for Texans, This is the same politician who, in pre-Tea Party 2007, proposed a constitutional amendment requiring any change in the business franchise tax receive a three-fourths majority before passage.