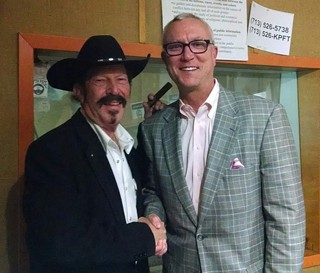 Hell freezes over in Houston: Kinky Friedman gets more than a handshake from Chris Bell, the Democrat he helped defeat in 2006 (Photo courtesy of Kinky Friedman campaign)

What the hell has Chris Bell been smoking? The former Democratic US congressman has apparently endorsed Kinky Friedman in his party's primary run off for agriculture commissioner.

For any of you too young or too new to Texas to remember, Bell challenged Governor Rick Perry in 2006, and he might have had a decent shot if it weren't for two huge flies in the ointment called Carole Keeton Strayhorn and Richard "Kinky" Friedman.

Strayhorn, a former Austin mayor and two-time State Comptroller, was a straight ahead Republican who ran as an independent because she couldn't beat Perry in the GOP primary. But at least she had some political credentials. Friedman's down-home charm and pro-pot stance seduced journalists into thinking, well, hell, why not? Meanwhile Democratic activists were blue that, while Bell was within five points of Perry, the capitol bureau was captivated by the dog and pony show of the two novelty act candidates. End of the day, Perry squeaked ahead with 39% of the popular vote, with Bell 10 points behind. With 61% of the state voting against Perry, there was a lot of suspicion and finger-pointing against Friedman as nothing more than a self-aggrandizing spoiler candidate.

It got worse. In 2010, Friedman threatened to run for governor as a Democrat, before he decided to endorse Perry for president in 2011 (he later tried to claim that he hadn't actually endorsed him, but writing an article for The Daily Beast entitled "Kinky for Perry" isn't exactly distancing oneself from a political enemy, is it?)

When Friedman announced he was running for ag commissioner this time, and as a Dem to boot, there was a sigh of relief that at least this time he wasn't sticking his nose into mansion house politics again. But that's still not enough to explain why Bell would break bread with the man that kaiboshed his career in '06, and who many party activists view as a distraction at best and a blowhard at worst?

Well, maybe Friedman's charm just won him over. Or maybe it's that Friedman is the better of the two remaining Democratic candidates. Y'see, the nomination was, by any clear political thinking, supposed to go to bison rancher Hugh Fitzsimmons, but he actually came third in the election, with 23.51% of the vote. Friedman came second, with 37.74%, and the winner with 38.74%, and so therefore his opponent in the run off is former Cleburne cattle farmer turned insurance professional Jim Hogan. The political unknown has resolutely failed to campaign, and even after a series of interviews, with publications including the Texas Observer and the Dallas Morning News, no one seems to have a clear idea about a single one of his policies.

Whoever wins in the run-off will face one of two Republican ex-state reps: Tommy Merritt, who was run off by the House conservative old guard in 2010, or Sid Miller, part of that self-same old guard who was in turn turned out by the Tea Party in 2012. It's a depressing indictment of Texas politics on both sides of the aisle that, at this point, the Democrats best option to take that all-important statewide office is a dilettante of questionable political allegiances and a platform that put legalizing marijuana as a higher priority than water conservation. As the Houston Chronicle so adroitly explained, "His gleeful hijacking of this policy debate does no favors for serious-minded advocates of decriminalization or legalization." 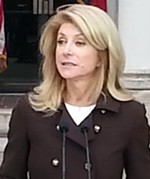