Mike Martinez and the Name Game 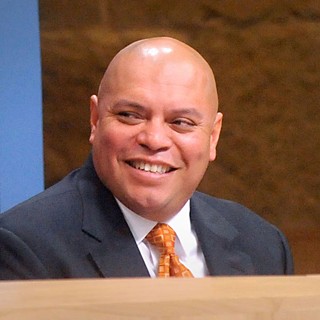 According to recent polling, Council Member Mike Martinez may be making a name for himself in Austin's mayoral race. The Martinez campaign released survey results this afternoon saying he is winning the name recognition game over opponent Steve Adler and likely candidate Mayor Pro Tem Sheryl Cole.

The voice response survey, conducted by Littlefield Consulting between May 1-2, shows 72% of respondents familiar with Martinez's name. Cole came in at 59%, with Adler trailing at 16%. The poll did not include musician Todd Phelps or tech entrepreneur Randall Stephens.

With the November election six months away, the Martinez camp is celebrating the results. "Strong name recognition means that Mike Martinez doesn't have to spend a ton of money building his profile," said Campaign Manager Matt Parkerson in a press release. "He can instead focus on engaging directly with citizens on the issues that matter to them."

The name recognition gap, however, may well lessen in the upcoming weeks. Adler's formal campaign kick-off Sunday was well-attended – and seemingly well-funded. Meanwhile, Cole is in the middle of a 10 district House Party Tour, but still undeclared.