Sunday afternoon, in front of several hundred supporters on the City Hall plaza, Steve Adler formally kicked off his campaign for mayor, asking Austinites to help him chart a “new way forward … that brings together all of Austin,” and focuses on “common goals, rather than on what divides us.” 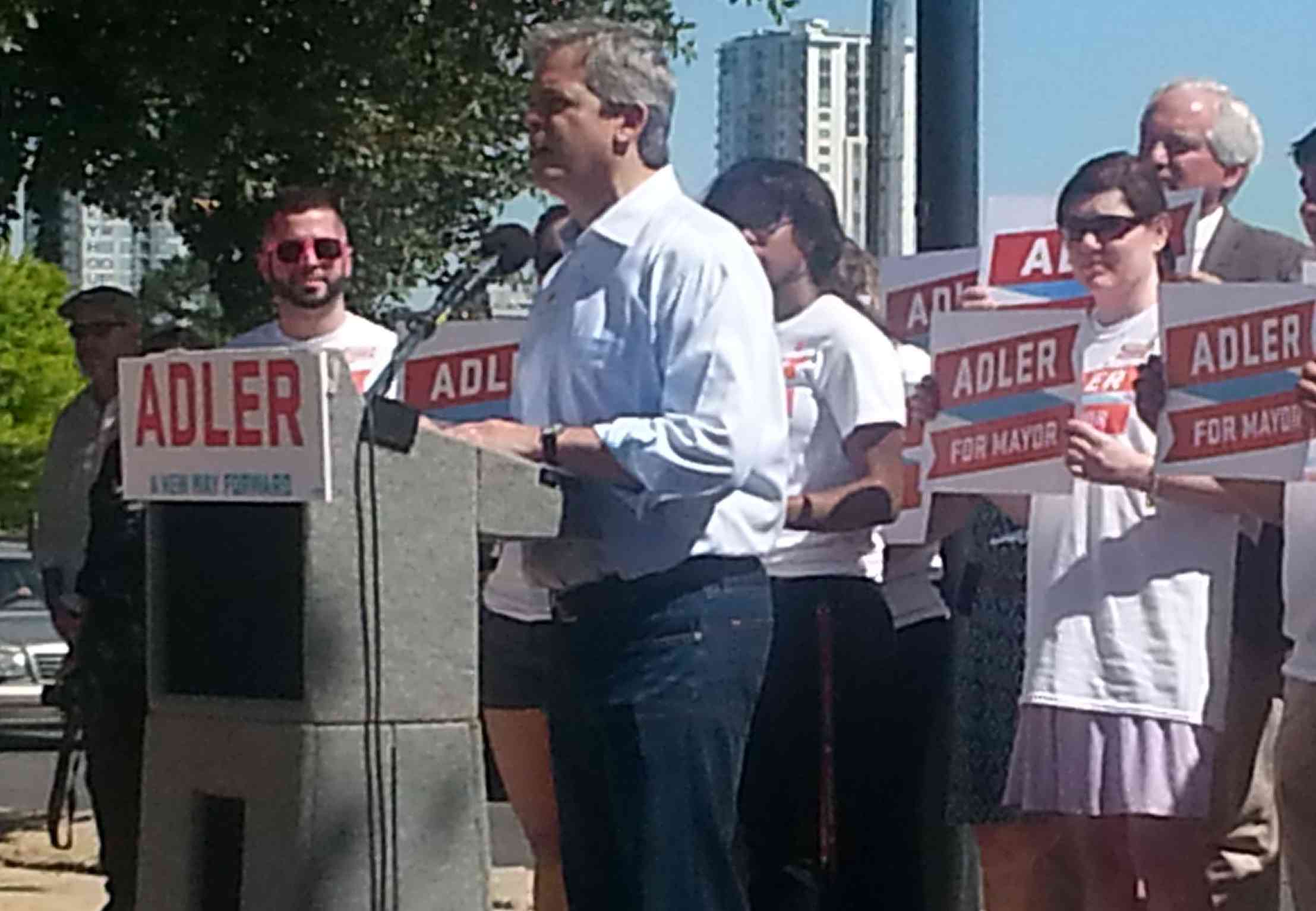 Preceding Adler was Cookie Ruiz, executive director of Ballet Austin, who as master of ceremonies praised Adler’s “life and career based on fairness.” Ruiz said she has known Adler for 17 years, partly through his board membership at the Ballet, but also for his volunteerism on various city projects concerning “affordability, health care, and public transportation.” She singled out for praise Adler’s work on the city's "cultural master plan," CreateAustin, the Hate Crimes Task Force, and the local chapter of the Anti-Defamation League. In sum, Ruiz called him “the person to lead us through this next and most exciting chapter of Austin’s history.”

Ruiz introduced Christopher Michael, slam poet and youth literary impresario, who recited a rousing poem on the theme of “Austin is weird … and one.” He was followed by Julia Cuba, executive director of GENAustin, where Adler’s wife Diane Land had encouraged Adler to join their efforts; Cuba said he was particularly good at expanding the reach of the “girl’s empowerment” group and getting a wide range of people to work together. Cuba said people should support his campaign because “he’s really good at this stuff.”

Adler’s UT Law School classmate and longtime friend, former state Sen. Eliot Shapleigh, took the stage to commend Adler, who served (essentially pro bono) as his chief of staff and general counsel at the Legislature, as “the best guy in the city.” Shapleigh praised Adler’s work ethic and his mastery of the school funding formulas, and called him “one of the best guys I have ever known” before introducing the candidate’s three grown daughters, who said they were “excited to share [their] father with the city.”

Adler’s oration was more than 20 minutes long – fairly extraordinary for a kickoff speech on a blazing spring afternoon – and began by tracing his path to Austin, where he’s lived for 36 years, from a D.C. childhood, scholarship student at Princeton and then UT Law – “Within 45 minutes of first arriving, I was swimming in Barton Springs. I knew I had found my home.”

He summarized his early work in civil rights law, “defending workers and women facing discrimination and sexual harassment,” his service at the Legislature, and his more recent work on civic and non-profit boards, including the Texas Tribune, GENAustin, Breakthrough, the Long Center, and Ballet Austin. “I have helped bring art to everyone in the community,” he said.

His more recent legal work has been in eminent domain law, and he emphasized that he has defended families and businesses when their property has been threatened by government or big corporations, including families in the Blackland neighborhood, “over a dozen churches,” and the Texas Nature Conservancy. “I’ve seen that government doesn’t always work for everyone,” he said. “That’s why I’ll work hard every day to ensure that our city of Austin works for all of us.”

Overall, Adler’s speech was long on big concepts, shorter on specifics. He criticized the city for being too “reactive” – to problems created by big events, or to damage done by floods – and suggested that his “new way forward” (also featured on signs carried by supporters) would be more proactive and address crises heretofore neglected.

On traffic, he said he would support an “integrated transportation plan” that would include everything from sidewalks to urban rail – but did not mention the current Project Connect urban rail plan now making its way to a November vote, instead promoting “staggered work hours, car-pooling, telecommuting and other alternatives.”

On education, he noted that the current state funding formulas are unfair to Austin students – as Austin ISD must return many millions to the state for redistribution although a majority of Austin students are poor. He said he would work with other local jurisdictions to “get our fair share of resources.”

On affordability, Adler noted that the city is doing well creating high-paying and low-paying jobs, but needs to do more to create “jobs that bolster the middle class.” Somewhat oddly, he got his biggest hand of the speech when advocating streamlining the city’s planning and permitting process “to help increase the supply of homes and apartments.” There was relative silence on one of his only specific moments, when he criticized Austin Energy’s $2.3 billion purchase of the East Texas wood-burning plant – part of the city’s package of renewable energy purchases.

He advocated “a massive effort” on water conservation, expanding open space and drought-protected green space, and preparation against wildfires. He said that we can increase density without undermining neighborhoods, and rewrite the land development code in an open and transparent way.

On the whole, it was a expansive and grandiloquent beginning, with much to evoke approval in general terms and very little to cause disagreement. Aside from praising incumbent and retiring Mayor Lee Leffingwell for his work on economic development, Adler made only one sidelong reference to his chief current opponent, Council Member Mike Martinez. “Others have had the chance over the last eight years,” Adler said, “to address the very same challenges we face today. It is time for new leadership. We don’t want experience in how things have been done in the past; we need a new and broader experience and a vision for how things should be done tomorrow.”

That said, amid the free ice cream and lemonade and a stirring opening blues breakout by the Peterson Brothers, it was impossible not to notice that gathered on the plaza was a very white, very West side crowd. The speech made the predictable nods to diversity and Austin’s “multiple races, ethnicities, and cultures.” Nevertheless, there was but a handful of brown faces among the assembled supporters, and fewer than a handful of black faces. The election is in November – we’ll have to see if Adler’s message can resonate throughout “all of Austin, as one Austin.”