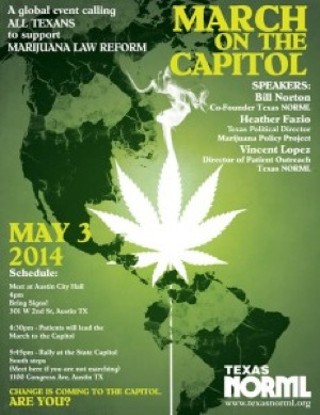 Some know it as the Global Marijuana March. Others call it the Million Marijuana March. Still others prefer Cannabis Liberation Day. Regardless which you prefer, the 15th Annual March to Free the Weed happens this weekend, Saturday, May 3.

Held the first Saturday in May since 1999, the Global Marijuana March seeks to rally support for reforming marijuana laws in cities across the world. Since 1999, organizers note, 843 cities in 72 nations have participated in the event.

Here in Austin, pot-law reformers will gather at City Hall at 4 pm Saturday afternoon for a march to the Capitol for a rally featuring representatives of Texas NORML – including its co-founder, Bill Norton – and the Marijuana Policy Project.

An after party will be held at the Flamingo Cantina.