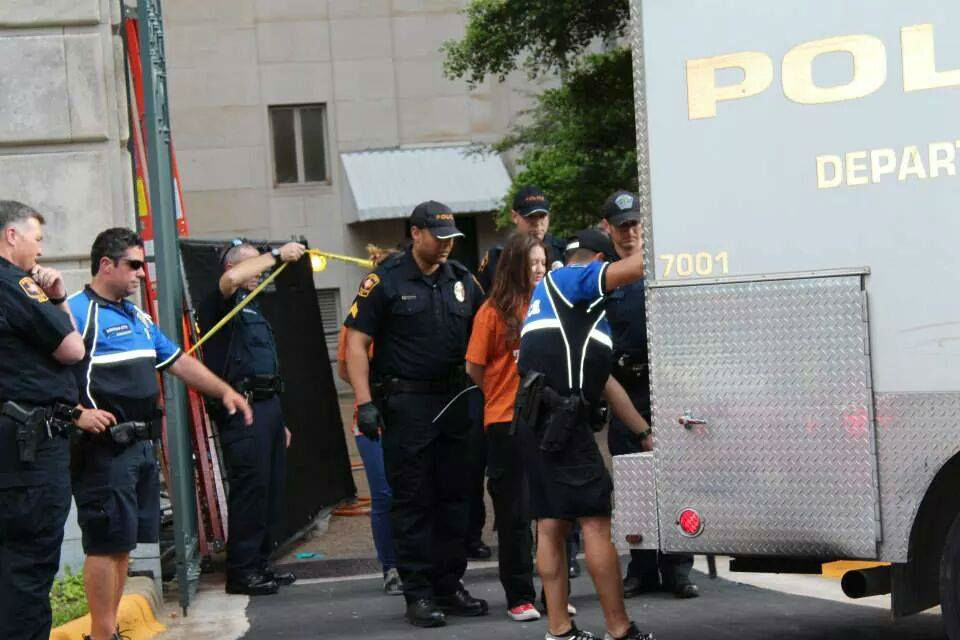 Eighteen UT students stepped out of Travis County Jail yesterday morning, where they spent 14 hours after being charged with criminal trespassing during a sit-in demonstration at UT President Bill Powers’ office.

The student activists, who staged the sit-in to protest the university’s "Shared Services" plan to eliminate staff jobs and consolidate responsibilities, were arrested around 5 p.m. Wednesday. Among the students were representatives from campus organizations University Democrats, University Leadership Initiative, and United Students Against Sweatshops.

According to activist leader Bianca Hinz-Foley, student groups have attempted to meet with Powers for the past 14 months, and went to UT’s tower to “sit and wait there until President Powers actually responded to all of the people who have spoken out against this plan.” Hinz-Foley said Powers did not make an appearance during the demonstration.

A rally against the "Shared Services" program kicked off the sit-in demonstration, during which several staff members spoke, along with faculty members and Councilman Mike Martinez. Following the speeches, several faculty and staff members went to the UT Tower to deliver a formal petition with over a thousand signatures to Powers. Hinz-Foley said she was surprised when the university employees were re-routed to the mailroom.

“It’s one thing to lock [Powers’ office] to students – that’s pretty routine for them – but it’s a different thing to lock it to faculty and faculty council members,” Hinz-Foley said.

Since the demonstration and arrests, UT officials have released a “Statement from UT Austin on the Exploration of Shared Services.” The statement assures that not only has no final plan been approved, but that the “process has been transparent, measured and thoughtful and has included students, staffers and faculty members” through public town halls, campus meetings, and one-on-one meetings with subject experts.

“In these days of dwindling higher education funding, we have to be responsible stewards of tax and tuition dollars,” the statement reads. “Consolidating administrative roles that are now spread across campus, and doing so largely through attrition, can help save $30 million to $40 million each year that can be spent on our educational mission.”

Hinz-Foley said the ball is now in Powers’ court. “I think that what’s important is that UT and President Powers have maintained from the beginning that this is a UT-driven plan … I think moments like this and yesterday, when staff came out so powerfully against the plan, kind of show that those things are just not true. This is not a UT plan when all the significant UT bodies – faculty council, staff council, students – are coming out against this.”