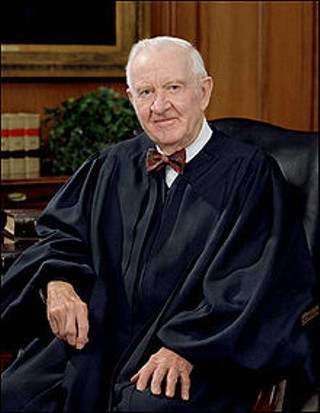 "I really think that's another instance of public opinion has changed and recognized that the distinction between marijuana and alcoholic beverages, is really not much of a distinction," the 94-year-old Stevens, appointed to the Supreme Court in 1975 by former President Gerald Ford, told NPR's Scott Simon.

A clip of Stevens' interview with Simon was posted to NPR's website. The full interview is slated to run tomorrow morning, Saturday, April 26, on Weekend Edition, which can be heard from 7-9 am on KUT 90.5.

Stevens told Simon that he believes the "general consensus" is that alcohol prohibition "was not worth the cost." In time, he said, he believes that will be the consensus on marijuana as well.

Tom Angell, chair of Marijuana Majority, which, in part, catalogues pot supportive statements of influential people, was quick to praise Stevens – and to add his comments to the MM website. "Justice Stevens is right. Public opinion is shifting rapidly in favor of marijuana legalization," he said. "Polls now consistently show that a clear majority of the public supports ending prohibition and, as this trend continues, we'll start to see more prominent people and politicians saying it's time to change the laws."