Prosecutors juggle charges – A, B, C – without resolution 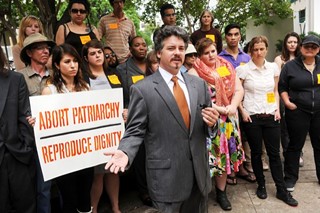 It's been more than nine months since state lawmakers passed the controversial abortion regulations known as House Bill 2 – that’s the same amount of time that a group of protesters arrested at the Capitol last July have been waiting to learn whether they'll be formally charged in connection with their activism against the abortion measure.

Indeed, according to attorney Paul Quinzi, in some of the cases the person arrested wasn't even actively protesting, but was simply standing with protesters in the Capitol rotunda or in other parts of the building. Former prosecutor Quinzi is defending nine of more than a dozen people arrested during the fractious debates that preceded HB 2's final passage July 12. The decision to arrest and to charge selected protesters was "arbitrary as to the people and arbitrary as to the conduct" alleged, he said.

Those arrested persons, who were released on bond, were never officially charged by the county prosecutors until more than a month later, when the DPS refined the charges to include the class B misdemeanor charge of disrupting a meeting or procession – regardless, said Quinzi, whether the person charged actually disrupted lawmakers as they debated passage of the measure. For some people, the new charge replaced the old charges; for others, the new charge was simply added to those already pending.

Moreover, prosecutors did not readily adopt the new charges alleged by the DPS, prompting Quinzi to file, in accordance with state law, for the charges to be dismissed; if the state hasn't acted on a charge within six months a defendant can asked that it be dismissed, he said. Accordingly, seven of his clients were due in court on Monday to have the charges dismissed. And each of the class A and class B misdemeanors the police had sought were, indeed, dismissed, he said. But in their place, prosecutors charged each with the class C misdemeanor offense of disobeying a lawful order, punishable by fine only, of up to $500.

Quinzi remains unsatisfied with the state of affairs. In the first place, unless the class C charges are also dismissed, the persons arrested will not be able to have their arrest records expunged – meaning that although they were never convicted or even jailed on the more serious charges, their records will reflect that they were once arrested for the jailable offenses. More importantly, given the nature of the arrests – many of his clients were seemingly plucked from the crowd, he said – going through with their prosecution will have a "chilling effect on free speech" and the right to assemble.

County Attorney David Escamilla said that the cases have taken so long to review in part because the DPS officers involved are regularly stationed at posts "all over the state" and are not regularly posted in Austin, and prosecutors had to speak with each officer and review each case carefully before deciding whether the charges were warranted. In the end, Escamilla said that in most of the cases the more serious charges were not accepted and instead the class C misdemeanors were deemed appropriate. The disobeying a lawful order charge has been a "very common charge in past protests," he said. (Several cases are still being reviewed, he said.)

Quinzi said that the charge may well be a common one – one that most defendants plead to, rather than fight – but his clients "are mad as hell" and intend to see the cases through to the end. If the state won't dismiss all the charges, he said, his clients will take their cases to court. "Prosecutors have a duty, not to convict, but to see that justice is done," he said. "I don't see how this [situation reflects] any semblance of justice.”