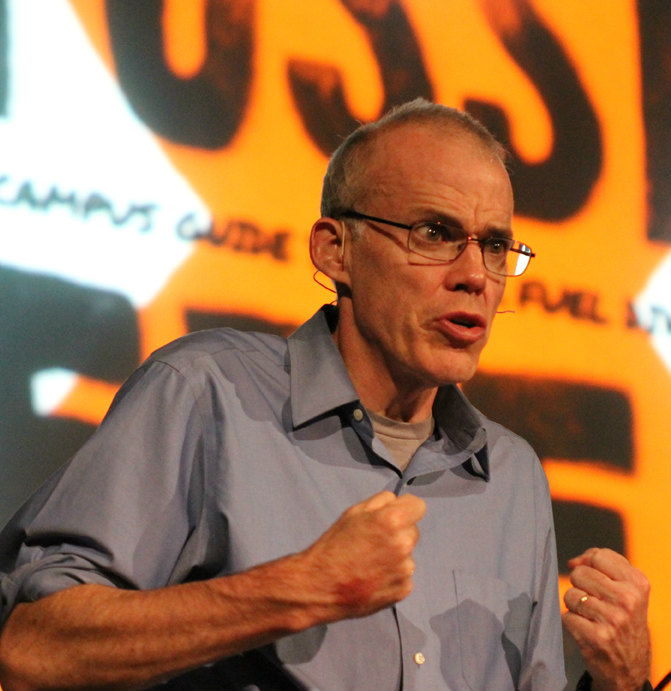 In a week abuzz with appearances from political and civil rights leaders, UT will also be hosting a bonafide rock star. Graham Nash and Mavis Staples may be bringing down the house at the LBJ Library's Civil Rights Summit, but there is only one ticket in town for environmentalists – Bill McKibben.

McKibben may not be a household name, but his work has helped make climate change a household concern. Since the late eighties, McKibben has been on the forefront of environmental activism, as both a direct activist and as a journalist. He has authored more than a dozen books about global warming and activism, and has been awarded the prestigious Guggenheim Fellowship. In 2009, McKibben was included on Foreign Policy’s list of the 100 most important global thinkers.

But that doesn't mean he is resting on his laurels. According to McKibben, his latest venture, 350.org, seeks to “build a movement that could start to match the money power of the fossil fuel industry with people power.” The web campaign, which provides a space for grassroots organizing and bottom-up climate change campaigns, is named to reflect the level of CO2 that scientists have said the atmosphere needs to reduce in order to preserve the planet: below 350 parts per million (ppm). McKibben's website has been used for environmental campaigns across the world, including fighting coal power plants in India and divesting universities from investment in fossil fuels.

His latest campaign – promoting higher education institutions to invest in sustainability, instead of fossil fuels – will be the topic of discussion at the University of Texas’ Sustainability Discussion, hosted by the President’s Sustainability Steering Committee today. For the discussion, Keith Brown, UT Austin Distinguished Teaching Professor in Finance, and Laura Starks, UT Austin Charles E. and Sarah M. Seay Regents Chair in Finance will accompany McKibben. UT Director of Sustainability Jim Walker will moderate the conversation.

This discussion is held in the wake of campaigns led by organizations including McKibben’s 350.org and the Responsible Endowments Coalition, which call for socially and environmentally “responsible investments,” especially from universities that make substantial monetary contributions or endowments. These campaigns urge universities to plug their flow of investments to fossil fuels, and to redirect the potential for investment toward sustainable energy research and production.

McKibben will argue in favor of higher education’s leading a shift toward sustainable energy pursuits. According to McKibben, historical examples prove that a divestment from fossil fuels can and does work. In the discussion, he will emphasize the harmful effects of fossil fuel use on climate change. “It’s not a hypothetical future threat, but a very real and present crisis,” said McKibben.

On the other side of the “climate change coin” reside arguments that divestment from fossil fuels is both ineffective and impractical. UT faculty Brown and Starks will discuss the financial implications of divestment, and whether it is financially responsible to invest in sustainable energy. Both faculty members have extensive finance backgrounds, and bring a business perspective to the conversation.

Regardless of what conclusions the discussion will come to, facilitators hope the debate will encourage students and university affiliates to think critically about higher education’s role in the sustainability discussion.