‘Martinez for Austin’ Kicks Off Campaign 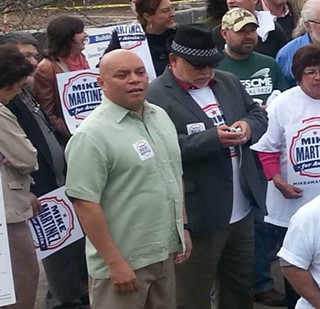 Arriving by bicycle to join a crowd of supporters on the hillside across from Barton Springs, incumbent City Council Member Mike Martinez formally kicked off his “Mike Martinez for Austin” mayoral campaign this morning by emphasizing his working-class roots and his family inspiration, saying he would “fight for every single person in Austin.”

Among family, family, friends and a crowd of supporters, Martinez said he would be touring the city’s new 10 Council districts by every means of available transportation – bicycle, car, bus, train – and even swimming across the Springs, west to east, to make certain both District 8 and District 5 received his initial campaign message (Barton Creek forms a boundary line between the two districts). He was introduced by Robin Cravey of the Friends of Barton Springs Pool, state House District 51 Rep. Eddie Rodriguez, and “the latest member of the Texas House of Representatives,” newly elected District 50 Rep. Celia Israel. Cravey noted Martinez’s “hands-0n” support for the pool and his frankness – “he tells you what he thinks and he tells you what he’s going to do.” Rodriguez said he is supporting Martinez “as my friend, first and foremost,” and as a council member who “has served every part of the city very well.” He called Martinez his strongest ally on “affordability issues, sustainable food, animal welfare issues … job creation, small businesses – Mike’s my guy, that I talk to the most at City Hall. I’m so proud to endorse my friend Mike Martinez for mayor. He’s our best choice for mayor by far, and I look forward to him serving as mayor of this great city.”

Israel said there are many reasons for supporting Martinez, “but there is one big reason, and that big reason sits in his chest: he has a big heart. … He’s tougher than a two-dollar fajita, but Mike is a softie, and in his journey on this campaign, because he cares so much, I look forward to watching him get choked up on the campaign trail.” Israel described the diversity of the supporters around Martinez as reflective of his wide range of support, and “what makes Austin such an amazing place.”

“Mike’s proactive approach to governance will make certain that Austin’s diverse residents are heard as this city moves forward,” Israel continued. “And it’s not just words. For this lesbian and Latina, actions matter,” and she recounted Martinez’s work to improve representation and working conditions for women firefighters, to oppose sweatshops, to support affordable housing and living wages, to improve transportation and financial transparency as board chairman at Capital Metro. “Mike understands the rapid growth that Austin is experiencing, and the challenges that come with that growth,” she concluded. “He knows affordability is one of the greatest obstacles facing Austin’s families, and he will continue to fight for all of us.”

Martinez’s own remarks were not policy-heavy, as he recounted his Rockdale upbringing and his arrival in Austin as a young man “with $50 and a trumpet,” and a plan to become a musician. A day job at construction work – “I’m a working-class guy” – eventually led him to the Austin Fire Department as a firefighter, then the Austin Firefighters Association and the presidency of the union, then to eight years of service on the City Council. “I’m now in my 22nd year as a public servant,” Martinez said, “and I hope to spend at least four more years as public servant, as your mayor.”

Martinez described how each step in his life had become his “greatest honor,” culminating in his marriage to Lara Wendler and his two sons, Alejandro and Diego. But when people ask him “Why are you running?” he said his inspiration is his mother Teresa Alvarez (onstage with several other family members), who he said defended him and his sister as children when they were asked to leave the segregated neighborhood pool. “It was not a sad thing,” Martinez said, “because through my mom it became a fight over equality” and the early inspiration for his adult activism. He said that if elected mayor, he wants to spend his tenure “fighting for every single person in Austin,” and that his training as a firefighter had been excellent preparation for public office, because “when that [alarm] sounds, you drop everything you’re doing to save, protect, and serve.” He said he and his staff have the same reaction when called for help by constituents.

Martinez called Austin “the greatest city in America,” and said he would fight for “equality in the work force” and for the future of working-class people and families in the city. “This is arguably the most prosperous city in America,” he continued, “but it can’t remain so without sharing that prosperity with all Austinites. … We have to be that voice” for every person, he said, and “to fight for everybody not only to get a seat at the table, but a full plate at the table.”

He had begun by saying the seven-month campaign would allow plenty of time for discussion of policies, but Martinez did emphasize one issue: traffic and transportation. He said the increasing problems of local traffic congestion affect every city issue – jobs, businesses, the environment, quality of life – and that his work at Capital Metro had convinced him of this priority, and more specifically of the necessity for urban rail. “We’ll have an urban rail bond on the ballot in November,” Martinez said, “and we need to support it. We should have had it 15 years ago.”

Martinez also praised the new 10-1 Council districting system, saying how “wonderful it is” that every part of Austin would now be represented on Council, and that he would be visiting all 10 districts via “every mode of transportation” available in the city. He also emphasized that at least nine of the new Council members would be newcomers to City Hall, and that the mayor would need to “know the system” and to help the new members “be as successful as they can be” in learning the system and sponsoring effective legislation.

Martinez closed as he had begun, by referring to his family, and to the particular inspiration of his youngest son, Diego. “I have a new inspiration to make certain that Austin is an even better place 20 years from now. … It is our turn, our time, and our responsibility.”

The Martinez campaign is in the midst of an all-day tour of the 10 new Council districts, ending this afternoon at Cheer-Up Charlie's, in District 9. The day's full itinerary is available at the "Mike4Mayor" campaign web site.

Adler was himself campaigning at several events Saturday morning, but took a moment to talk to Newsdesk by phone. He said he is looking forward to a “robust debate with Mike Martinez about the path the city’s going to chart going forward. We’re at a crossroads, and the choices we make are going to determine whether we effectively deal with gridlock on our roads and in the government, and increasing affordability, or whether we continue down the present path.”

Asked if he had any reaction to Martinez’s declared support for a potential urban rail bond, Adler responded, “We have gridlock both on our roads and in our government, and we can’t continue down the present path. But I really do believe as we bring new communities and people who haven’t always thought that they were heard, to the table, that we have a chance to get things right in a new way.” Asked if he has a position yet on urban rail, Adler responded, “I think mass transportation has to be an element of what we do.”

We spoke to Stephens by phone as well. On affordability, he said that public officials often address the issue without acknowledging the “market forces” that drive housing prices, and that Austin has become an “increasingly affluent community” putting pressure on the cost of established homesteads, especially in the central city. “When people make vague references to ‘gentrification,’” Stephens said, “they don’t always acknowledge that it’s a natural byproduct of rising property values as well as transportation issues,” because people want to live Downtown, nearer their places of employment. Stephens said the city needs to be more willing to allow “multiple-unit” housing Downtown, apparently in reference recent Council actions against “stealth dorm” housing, as well as his declared strong support for “short-term rentals” as a property right of homeowners.

Asked about his position on urban rail, Stephens said he had “crossed a Rubicon” on the issue over the years. He had consistently voted against rail proposals, he said, until he had begun commuting partly by bicycle and then rail between his home in Avery Ranch and his job at Austin-Bergstrom International Airport. “I would sometimes bike down very early in the morning, and then catch the train at Plaza Saltillo to return. It changed my mind about rail.” He said he is now “very much in favor of urban rail and regional rail” – although he warned against any future plan that is driven by special interests or big campaign contributions. He also suggested that any future rail plan needs to be made with attention to not causing additional traffic problems, perhaps by including more rail overpasses crossing major highways.

Follow Newsdesk for continuing coverage of the mayoral campaigns, as well as all the City Council campaigns.

‘We Got This!’
Mayor Pro Tem Sheryl Cole aims to drop the ‘Pro Tem’