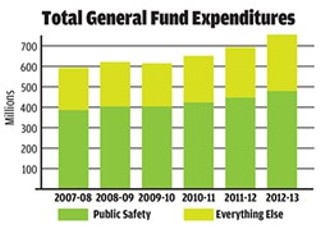 Thursday’s City Council agenda includes consideration of increasing the property tax exemption for homeowners aged 65 or older, or disabled – currently $51,000 and unchanged since 1986. And a potential move to consider spending some of a $14.2 million budget surplus is gathering backlash from anti-taxers.

The two proposals might seem distinct, but each involves addressing city budget projections and trying to balance Austin needs with city revenues. Deputy Chief Financial Officer Ed Van Eenoo provided projections reflecting the long-term costs of any increase in the property tax exemption (amplified by anticipated increases in the local percentage of elderly homeowners) as well as the effect of displacing that exempted cost onto other homeowners. Were the exemption raised to $57,000, for example, staff estimates a $1 million loss to revenues in 2015, and $5.1 million over five years, while saving the exempted homeowner about $30 a year. Meanwhile, Van Eenoo estimates, “Although the relationship is not perfectly linear, roughly speaking, each $1,000 increase in the exemption would engender an additional property tax burden [to non-exempt homeowners] of approximately $0.18 for every $100,000 of assessed value.

In an informal March 4 work session discussion (with Mayor Lee Leffingwell absent), some Council members pushed back against a staff suggestion that any “surplus” – a very flexible term, that can readily imply either good budgeting or high taxes – be held over for the new fiscal year, or at least until next year’s projected budget numbers are available. Members argued there are real needs that are often winnowed away at formal budget time, and otherwise unanticipated costs that also must be addressed before the beginning of the summer budget cycle.

More specifically, CM Kathie Tovo proposed to add a promised commercial kitchen to the Asian American Resource Center, CM Chris Riley would fund a master plan for land on the South Shore of Lady Bird Lake, and CM Mike Martinez said that if we’re talking about unanticipated priority items, additional discussion of flooded home buyouts along Onion Creek are certainly in order. CM Bill Spelman suggested any decision might wait until preliminary 2014-15 budget numbers are available, and in an earlier meeting, Leffingwell argued that any “surplus” should be held back for potential tax relief – i.e., to help resist pressure to increase next year’s property tax rate.

The AARC and the South Short proposals are posted for potential action at Tuesday’s work session (but not on the Thursday agenda). In response, on Tuesday morning, a odd-bedfellows alliance of anti-tax activists will hold a press conference/rally at City Hall to “Oppose City Spending of $14.2 Million Budget Surplus.” Organized by anti-tax activist (“consumer advocate”) Bill Oakey (Austinaffordability.com), the event will feature Oakey and perennial GOP candidate Don Zimmerman of the Travis County Taxpayer’s Union, last heard from unsuccessfully opposing the 2013 Central Health Care District Bonds and the city’s affordable housing bonds. They will ask that Council delay any action on the expenditures to allow more public input, and a “unanimous commitment not to spend the budget surplus [to] send a clear, positive message to the community on fiscal responsibility and affordability.”

In a press release, Oakey said, “A spending vote today would just incite the Council to dip into the stash again and again until it’s completely gone. Spending budget surpluses outside of the annual budget process bypasses the critical checks and balances provided by community review, public hearings, and stakeholder contacts with Council Members. … We support City Manager Marc Ott’s recommendation to either hold the surplus in reserves, or apply it towards next year’s budget to provide property tax relief.”

Oakey added a letter to Council members reiterating those requests, concluding, “Put aside the wish list of spending items until next year’s budget cycle. Vote unanimously to accept the City Manager's recommendation and save the budget surplus. Please do the right thing for the current and future citizens of Austin!”

In a separate press release, Oakey welcomed the prospect of an increase in the exemption for elderly or disabled homeowners, writing, “This is long-overdue good news for some of Austin’s longtime residents, who have been crushed by skyrocketing home appraisals and never-ending property tax increases.”

City Council meets Tuesday morning for a work session, 9 a.m. at City Hall, with some budget matters posted for potential action. The next regular meeting is Thursday, March 20, 10 a.m. at City Hall. Agendas are posted here.