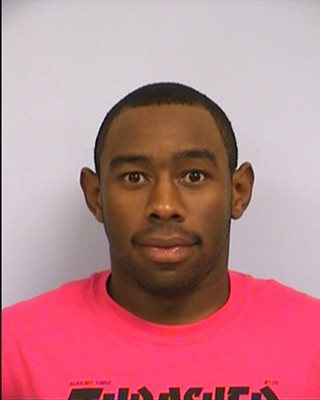 On Saturday, Austin Police arrested rapper “Tyler the Creator” (Tyler Gregory Okonma) on a charge of “riot” – a Class A misdemeanor. Along with the arrest affidavit, APD released a brief video clip of Okonma exhorting the crowd outside Scoot Inn to “Fuckin’ run in right now, just do it!” while the crowd yells, “Push, push, push!”

According the APD affidavit on the bust, police had been called to the venue because of possible overcrowding, beyond the 999 people described as Scoot Inn capacity. Club employees were attempting to enforce a one-out/one-in rule when Okonma allegedly began shouting, “All y’all outside the [wooden] gates, all y’all push through!” When employees tried to secure the gates, the crowd responded to Okonma’s shouting by crushing through – nearly trampling people who fell near the front of the onrushing crowd. According to the affidavit, one employee who was trying to protect a woman on the ground was punched by an unidentified crowd member – an “assault with injury,” automatically increasing the riot charge from a Class B to a Class A misdemeanor.

According to the affidavit, Okonma apologized and then cursed the employees working the door, before exiting the stage and apparently leaving the club. The crowd dispersed when more officers arrived; Okonma was arrested later that day, reportedly at ABIA, and posted a $25,000 bond.

Tyler the Creator had been scheduled to perform at The Mohawk early Thursday morning, but the show was canceled after the fatal crash outside the club at about 12:30 a.m. According to the Chronicle's Kevin Curtin, the rapper had tweeted, "Show isn't happening, something sad happened. I'm bummed."

Late Friday, APD also released additional details concerning the aftermath of the Wednesday night/Thursday morning deadly crash on Red River St. According to the press release, the driver, Rashad Charjuan Owens, has been charged with capital murder, under a bond of $3 million. He remains in custody, with additional charges to be presented later to a grand jury. Under state law, a capital murder charge requires “two or more deaths in the same criminal transaction.”

APD is asking that anyone with information regarding the crash incident call the Vehicular Homicide Unit at 512-974-5594.