'Would I do it again? The answer is yes.' 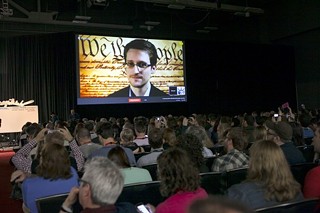 In an hourlong conversation live-streamed to SXSW Interactive from an undisclosed location, whistleblower Ed Snowden defended the Constitution, addressed potential protections against mass surveillance, and discussed why he believes he had to leak secret information to public sources.

In a discussion that was somewhat more technical in detail than perhaps anticipated, Snowden was joined by his ACLU attorney Ben Wizner and ACLU technologist Chris Soghoian. The conversation bounced back and forth from policy implications – focusing on protecting the privacy of ordinary citizens from mass government surveillance – to technical matters, particularly what tools might be made available to make users' data less easily available to government snooping.

Snowden and Soghoian emphasized that privacy can be protected – "encryption works," Snowden insisted – and argued that precisely because of Snowden's leaks, major companies have had to improve their security systems, and both companies and officials have begun to push back against overbroad government surveillance.

Snowden's livestream to the Convention Center apparently mimicked his message to a degree, as Wizner noted that the signal was bouncing through "seven proxies" on its way to Austin, to make it more difficult for security services to pinpoint Snowden's precise location. Wizner also noted Kansas Congressman Mike Pompeo attempt to stifle Snowden's talk by a request to SXSW organizers – saying that if Snowden listened to Pompeo and returned home without protections, he would certainly be in an isolation cell (e.g., like Chelsea Manning) and without the ability to freely communicate.

Snowden and Soghoian both argued that while National Security Agency officials constantly justify their massive surveillance programs by citing national security, the NSA has in fact made public security weaker in several ways: by demanding that program applications be made less secure to better enable government intrusion, by focusing on attacking other systems rather than defending our own, and by emphasizing mass surveillance over focus actual dangers.

The Interactive Conference is a big draw for tech experts, and much of the conversation addressed how technical professionals can be helpful in improving the security of computer systems and in pushing back against the government's attempts to weaken them. Tech folks can "protect through technical standards" that outrun slower policy changes.

Snowden challenged "makers and thinkers and the development community" to develop technical standards that protect Web privacy, because official sources like the NSA are "setting fire to the future of the Internet." Snowden and Soghoian both emphasized that the most effective way to protect individual citizens from government intrusion is "end-to-end encryption" rather than more obscure and specialized applications designed by and for experts. Protection must be ordinary and by default, not requiring specialized knowledge or "opting-in."

Snowden called it "The Glenn Greenwald Test" – that is, a reporter should be able to receive information from technical sources without himself being an expert in encryption or other technical means of protecting that information from prying eyes.

Snowden acknowledged that there is always a tension between security and privacy, but insisted that governments (and corporations) must be restricted from engaging in massive surveillance that is unnecessary, counterproductive, and unconstitutional. He noted that "data-mining" might be necessary for commercial purposes if we expect Internet activity to be most free, but such data should not be stored or subsequently handed over to the government, and instead should "age out" and be discarded.

Asked during a brief Q&A section whether government or corporate spying is more worrisome, Snowden answered government, because government has the power to take away rights from or even kill citizens, and can moreover seize the information gathered by corporations. All these powers must be subject to public information and accountability, "public advocacy and watchdogs" to defend citizen privacy and rights.

Snowden in passing also defended himself against charges of "spying" for Russia or other governments. He said there is no evidence that any of the information he passed to journalists has been given to any government: "The U.S. still has no idea what documents I have because encryption works." Moreover, he said, if we can build a system that works primarily by end-to-end encryption rather than special tools which can be disabled, it then becomes simply too expensive for the NSA to engage in mass surveillance.

Wizner and Soghoian both said that Snowden's disclosures have benefited all users and all countries, because they have forced systems to be made more secure against intrusion, and Snowden added, "Every society in the world has benefited" both in security and understanding the threat of mass surveillance against public privacy and freedom.

In closing, Snowden thanked SXSW and Austin for enabling this conversation about security, privacy, and Constitutional rights. "Thank you all; thank you, Austin."

The conversation was live-streamed around the world via the Texas Tribune website, and the ACLU says it will post video of the event later today.