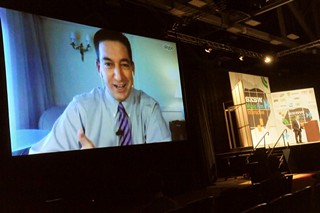 Glenn Greenwald, the Constitutional attorney who became a blogger and then reporter – and Ed Snowden’s go-to journalist to publish his cache of National Security Agency documents – Skyped to SXSW Interactive this afternoon, talking the nature of politics and the necessity of public journalism.

Greenwald was interviewed from Austin by Micah Sifry, the editorial director of Personal Democracy Media. Greenwald currently lives and works in Brazil, although he suggested near the end of his hour-long conversation with Sifry that he and other “involuntary exiles,” (as Julian Assange called them earlier this week), forced from their home countries by the international security state, would be returning home “with the right protections and under the right circumstances.”

When whistleblower Snowden needed to contact someone trustworthy to accept and eventually publish the leaked NSA documents Snowden had acquired through his work at security firm Booz Allen Hamilton, he chose Greenwald because of his record of defending whistleblowers as well as his harsh criticism of mass surveillance by the U.S. and other governments. Greenwald became both a reporter and a publisher of the Snowden documents, collaborating with other reporters and publications (The Guardian, The Washington Post, The New York Times, and others). Greenwald has helped reveal the gross overreaching of the NSA, and both the range and the ineffectiveness of its mass surveillance, providing indispensable critical reporting on the agency’s violation of the U.S. Constitution, its spying on other governments, and its dishonesty about the extent of that surveillance.

In his conversation with Sifry, Greenwald laughed at being used as an example by Snowden (earlier in the day) of “journalistic incompetence” at understanding the technical side of privacy issues. (Snowden had said privacy methods must pass “the Greenwald Test” of being easy to use.) But he added that he had initially resisted all the security practices Snowden had recommended, considering them too time-consuming and difficult. While there is a learning curve, Greenwald said, in fact he eventually realized that encryption procedures and the like are “really quite easy” to learn and employ.

Moreover, Greenwald recommended that more and more people make use of encryption, saying that initially the security agencies see the use of encryption as itself a marker of potential sinister actions – but that if more people come to use encryption, it will make it difficult or impossible to continue mass surveillance, and the agencies will have to focus on actual suspects as opposed to everybody using the Internet. “People who use encryption software are treated as suspicious,” Greenwald said, “so many more people need to use it to normalize it.”

Greenwald noted that political and prosecutorial attacks on whistleblowers and journalists are designed to create a climate of fear, to deter others from acting likewise. He noted that in Snowden’s case in particular, it is useful to those in power for Snowden to be trapped in Russia -- the U.S. revoked his passport -- so that it’s easier to accuse him of betraying the U.S. or being in league with a foreign power.

Greenwald said the current relationship between political power and privacy is exactly the reverse of what it should be: official secrets are massive, while individual privacy is routinely violated. He noted the ridiculous overreach of “secret” designations -- saying that the Snowden papers are full of public information and utterly innocuous documents that have been classified "top secret" -- and said that the default policy should be that official documents, with few exceptions, should be classified, and private information of ordinary citizens, with very few exceptions, should remain private -- as the Constitution determines.

Questioned by Sifry about potential political change, Greenwald expressed little optimism that much change on this front will be achieved by conventional Congressional action -- because, he said, the current policies are “bipartisan” and institutional -- but he added that such political fights are important both procedurally and symbolically.

Greenwald has recently launched, with funding from eBay billionaire Pierre Omidyar, an online publication called The Intercept -- initially devoted to publishing more stories based on the Snowden documents, but steadily growing as a “new model” of alternative journalism. He said that the purpose of journalism is to “shine a light on the information that world leaders want to hide but the public needs to know,” and that his metric of eventual journalistic success is “how much change you’re able to generate.” He said he isn’t really focused on the business side of The Intercept -- except to the extent of maintaining journalistic independence -- and that beyond that, “journalism is part of our larger obligations as citizens.”

Greenwald said he and other reporters are “about half-way” through reporting the basic stories emerging out of the Snowden documents, and that it will be “another six or seven months” before all of those stories emerge, including many that “are more important and more complex than have already been revealed.” He said that he is not simply dumping the documents wholesale because (1) he promised Snowden he wouldn’t do that; (2) there are genuinely some matters that need to be redacted as necessarily secret, misleading, or recklessly damaging to individuals; and (3) some of the materials simply need additional reporting to be explained or put in context.

Noting the SXSW Interactive occasion, Greenwald noted that all these technological advances, including the Internet itself, are tools that have the potential for good or evil. They can build community and political freedom, he said, or they can be used by governments for mass surveillance that “perverts and threatens” their purposes. But he also noted that it’s not helpful to be constantly in fear or paranoid about surveillance and its consequences; journalists in particular, he said, “need to take such risks seriously but not let it interfere with your work.”

Asked to sum up the day’s conversations, he called the Snowden story particularly inspiring, because it reflected how one person, otherwise without access to the levers of power, could be a force for change. When we’re confronting government or corporate power, Greenwald concluded, “We all need to avoid defeatist thinking, and take decisive and bold action in defense of our values.”