Big news on the bad weather front: Overnight freezing weather means a delayed start to primary voting in today's elections, while yet again schools and campuses will be locked until late.

UPDATE: Travis County polling locations will be open until 9:00 tonight due to the bad weather late start.

It'll be a late start at a lot of schools. Austin, Del Valle, Eanes, Lake Travis, Leander, Pflugerville and Round Rock ISDs are all on two hour delays.

UT Austin closed at 10pm and will not re-open until 11am: That means shuttle buses will not start running until 9:30am.

Also closed until 11am: Austin Community College,Huston-Tillotson University, and Texas State, while Concordia will be closed until 10:30am. No word yet from Southwestern or St. Edwards.

UPDATE Tuesday, 7:51am. Both St. Eds and Southwestern are open as normal, but recommend using caution on the roads.

The city of Austin has announced that its offices will remain closed until 11am, and the council work session will be similarly delayed.

It's also a late start in Travis County, with offices closed until 11am and the commissioners court not meeting until 11am.

One surprising bit of bright news: Bar the delayed start to UT Shuttle services, Capital Metro is still planning on a normal service.

UPDATE 7:51am Austin Police Department reports its officers responded to seven collisions between 6am and 7am, so drive with caution. 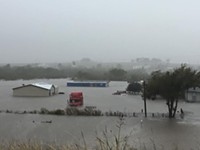