The Pols Just Keep on Coming

Your Guide to Candidates for the New 10-1 Universe 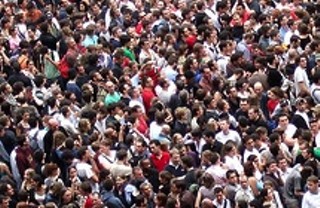 Not this many … but getting there

Over the last several weeks, we've been compiling a catalog of potential November candidates for Austin Mayor and City Council. Here's our current master list of the entire field: Counting mayoral hopefuls, we’ve just passed 50 total candidates – not all of them rock solid, but most saying they are indeed running – and the rumor mill says more to come.

The filing period does not take place until July 19-Aug. 18, and campaigns cannot officially begin until early May. We’ll continue to report on additional names, on the Chronicle’s Newsdesk daily coverage and also in the print edition, and we’ll try to maintain a master list of the Battle Royale To Come right here at austinchronicle.com/elections.

We’ve continued to contact as many real or rumored candidates as possible, and we don’t add a name until we’ve been able to confirm that she or he is running or considering a run. Consider it a work-in-progress: a pending candidate list (in alphabetical order) to ponder as the official campaign period approaches. Undoubtedly it's incomplete – if you should be on it, or if you know someone considering a run, or if you’re currently on the list and your status has recently changed, please drop a line to mking@austinchronicle.com.

Stephen Adler, eminent domain attorney and co-founder of Barron & Adler, LLP. On Tuesday, Jan. 28, Adler made it official with a press release and a campaign site: "We've got to seize this tremendous opportunity to empower more Austinites to ensure that we make decisions as one city." Adler has named Entrepreneur Foundation CEO Eugene Sepulveda as his treasurer.

Mayor Pro Tem Sheryl Cole says she is "thinking about" a run, hopes to make a "family decision" by early spring.

Council Member Mike Martinez has not made a "final decision," but does "want to serve in that capacity at some point" and "would expect to be a candidate" to be a mayor "who understands the working people of this community."

Patsy Woods Martin is a community leader, founder of "I Live Here, I Give Here" philanthropic effort -- and no longer a mayoral candidate. On Sunday, Jan. 28, Woods Martin emailed supporters that "it's time to pull the plug" on her mayoral campaign because she was spending "too much time bogged down in a process that has little to do with public service."

Bill McLellan, former 3M executive, chief development officer at Family Eldercare, longtime civic activist -- and no longer a candidate. Early Tuesday, Jan. 28, he issued a press release ending his campaign and endorsing his "good friend Steve Adler." He also said he could not continue his campaign "due to recent personal and family circumstances."

Council Member Laura Morrison confirmed recently that running for mayor is "a question I am seriously considering."

Mark Williams, former AISD board chair, said in December he was being encouraged to run, and was "seriously considering" the idea, but on Thursday, Jan. 23, Williams told the Statesman that there are enough "qualified candidates" already in the mix and he won't be running.

Andrew Bucknall, former transportation commissioner and 2005 Place 1 Council candidate says he is being “encouraged to run” and is seriously considering a candidacy.

DeWayne Lofton, Place 6 candidate in 2006, has said he's been "waiting a long time for another opportunity" and is "looking forward to seeing how this new system will work."

Sam Osemene, Austin Community College Assoc. prof. of government, small business owner, and 2008 Place 6 candidate said he’s a candidate and declared on Facebook (www.facebook.com/sam.osemene): “The game is on. Get on board. We are moving forward. I need your support.”

Frank Coniglio, small businessman, longtime state employee, and Dem activist says he is “about 75 percent certain that I will enter the District 2 race.”

Delia Garza, assistant attorney general, former firefighter (Local 975), and Charter Revision Committee member, says she "plans to run" and intends to "provide a voice for a part of Austin that hasn't had a voice."

Susana Almanza, co-director of People Organized in the Defense of Earth and Her Resources, did not respond to Chronicle queries, but elsewhere has announced her candidacy.

Mario Cantu has been considering a run for several weeks, and confirmed to Newsdesk Feb. 2 that he will be joining the burgeoning list of candidates in District 3. He describes himself as an Austinite "born and raised," and has served as the Sector 9 representative for the Austin Neighborhoods Council. He says he's a "neighborhood factivist" -- preferring to get "the facts straight" before taking action.

Perla Cavazos, former Council candidate (2009) and legislative director for state Sen. Sylvia Garcia (D-Houston), is "leaning towards" another run, but remains in the "exploratory stage."

Shaun Ireland, Former Place 6 candidate says "neighbors and supporters ... have encouraged [him] to run." In a recent filing with the city clerk, Ireland designated himself as his treasurer for the Council campaign.

Nicholas Lucier, ACC student and local activist (currently on the anti-fluoride campaign); briefly ran for mayor in 2012 as a “Mushroom Tea Party” candidate; is promoting voting among students and artists; says that “through the mobilization of the local student population and art scene, I foresee a great shift coming to Austin in 2014.”

Jayme Mathias, current AISD board member, is "committed to completing his term" but is being "encouraged to consider" a run by ­supporters.

Fred McGhee, author and public housing advocate, is "strongly considering" a run and would be a "serious candidate."

Eric J. Rangel, a Place 4 candidate against Laura Morrison in 2011, was out of the country over the holiday, but returned to say, “I am highly considering running for City Council's representative in District 3.”

Sabino "Pio" Renteria, longtime Eastside activist, said it's much too early to decide (he's focused on the March Dem primaries), but he is "keeping his options to run open" in District 3 – where he would face, among others, his sister Susana Almanza.

Thomas Gohring, The owner of Kick Butt Coffee and Master Gohring's Tai Chi & Kung Fu is considering a run, but has a geographic conundrum – his businesses are in District 4 (Airport Boulevard at Koenig Lane), but he lives in District 7.

Roberto Perez Jr.: Goodwill Industries project coordinator and neighborhood Rundberg Revitalization Team co-chair says he's "considering his options" and "sees the need of someone who lives [in] and has knowledge of the area ... [and] should have a decision in early February."

Laura Pressley: Several sources told us that former Place 2 candidate Pressley has moved into District 4 and is considering another run, and her Facebook page currently features an "Elect Laura Pressley" sign. Asked directly if she's running, Pressley responded: "I'm not sure if I'll run for City Council. ... There is a lot on my plate right now."

Fred Cantu: Political consultant and longtime Democratic activist, most recently for single-member districts (Austin Tejano Democrats chair, and last week noted as possible candidate), is "strongly considering" a run in light of a "need for fresh blood" on Council.

Peter Einhorn – policy director for former Travis County Com­mis­sioner Sarah Eckhardt and chief of staff for her appointed interim successor Bruce Todd – says he's considering a run: "I don't have a time frame for making a decision, but am aware that the clock is ticking."

Dave Floyd, risk management attorney, of counsel to the DeLeon & Wash­burn firm, and a board member of the Texas Advocacy Project, says he's "seriously considering a run."

Jeff Jack, architect, city planning commissioner, and longtime City Hall activist, is "seriously considering" a run and reviewing both his personal circumstances and the political context.

Jade Change Sheppard, recently a Democratic candidate for state House District 50, says she’s “not ruling out” a Council run, and is in the process of “seriously considering it” and “analyzing the district.”

Jay Wiley, former George W. Bush and Phil Gramm aide, and former Federalist Society president, already has a campaign website (www.jaywileyforaustin.com), and a no tax, no spend, no bag-ban platform. UPDATE Feb. 4: Wiley was kind enough to point out that he officially designated a treasurer (Evelyn Stone) in 2013, which we missed in our check of City Clerk postings. Indeed, he filed that notice on Oct. 3, making him easily the earliest starter in the City Council campaign marathon.

Alex Blum lives in the North Lamar/Parmer Lane area, and told Newsdesk he is "pretty sure" he will be running and should have more information about his candidacy available soon.

Ed English is a retired sales and marketing professional, was active in promoting the 10-1 Council through Austinites for Geographic Representation, and describes himself as a "centrist unaffiliated with any party." He cited transportation and affordability as major issues, and said he will be "making a firm decision" on a candidacy soon.

Ben Leffler, public policy professional and former city auditor/investigator, is "considering" a run, but had made no decision as of early January.

Rebecca Bray: Engineering senior project manager (Brown & Gay Engineers, Inc.) and Real Estate Council of Austin board member has confirmed to the Chronicle that she's "seriously considering" a run while "performing her due diligence" and waiting on the release of "final election rules."

Eliza May, longtime civic activist, is "very seriously considering" a run and "exploring the political landscape" toward reaching a decision soon.

Darrell Pierce, former Council candidate and management consultant/business owner, is "close to a decision" to make another run.

Ed Scruggs, civic activist (most recently on local gun control issues), is "carefully considering a run" and expects his early decision process to "come into focus after the new year."

Chris Riley, Place 1 Council incumbent, "doesn't expect to make a formal decision until spring" but is "very excited by the prospect" of a district campaign marked by "knocking on neighborhood doors."

Marjorie "Margie" Burciaga, small business owner and community volunteer, was "seriously considering" a run a few weeks ago, in the "exploratory stages" of assembling a campaign. She recently designated attorney and former assistant D.A. Mindy Montford as her treasurer.

Tina Cannon, former Place 5 candidate and educator/entrepreneur, already has a campaign website (www.tinacannon.org) and has been "encouraged by the support" she's receiving in the new District 10.

Mandy Dealey, initially, former Place 3 candidate and long-serving commissioner-of-all-trades said she was "not likely" to run in District 10; she now says, "I have been persuaded to run for Council Place 10. I guess this is a case of 'never say never!'"

Sheri Gallo: Realtor, former chair of Hous­ing Authority of Austin, former board member of RECA; ran unsuccessfully as GOP candidate for Precinct 2 County Commissioner in 2002 (as Sheri Perry Gallo). She's "seriously considering" a run and reaching out to potential supporters, and says that under single-member districts, "I think that a person with my fiscally conservative (spend wisely), socially moderate views can be elected to the City Council."

Matt Lamon, longtime Austinite and currently chief of staff to state Rep. J.M. Lozano (R, Kingsville), says he “intends to seek the seat” and he’s “looking forward to working on issues that matter most to Austinites.”

Jason Meeker, former Place 1 candidate and current Zoning and Platting Commis­sioner, says he's not ready to make an announcement, but is "considering" a run.

Robert Thomas, management consultant, ran as a Republican against state Rep. Donna Howard in HD 48 in 2012; on his campaign Facebook page (www.facebook.com/VoteRobertThomas), he recently posted: "To be clear, we are VERY seriously inclined to run to represent our home area on the City Council."