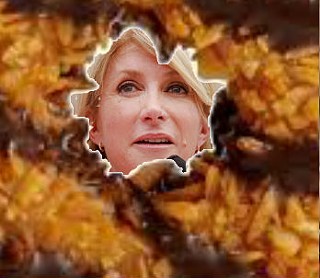 America, it's time to lose your cookies. A radical feminist agenda is hiding beneath flakes of toasted coconut and ribbons of dark chocolate. Sadly, those delicious Girl Scout Cookies are baked with sugar, enriched flour, and lies.

At least that is the message behind Cookie Cott 2014, an effort led by Pro-Life Waco director and Baylor University professor John Pisciotta. Aided by a Fox News segment featuring the ever-sober Megyn Kelly, Pisciotta has created a website aimed at convincing Americans to give up Thin Mints for less controversial treats. Probably stale melba toast.

The brouhaha started when the Girl Scouts tweeted a link to a HuffPost Live panel discussion on who should be named 2013's woman of the year. Along with activist Malala Yousafzai, Beyoncé, and "the Brave Women of Twitter," Sen. Wendy Davis was named. To make matters worse, the organization also shared a Washington Post article on Facebook that named Health and Human Services secretary Kathleen Sebelius as a "woman who made a difference in 2013." Both social media blasts were conversation starters for followers to discuss female role models – from women to women. They were both the kind of post most likely to draw the rancor of certain men.

The issue at hand, of course, is a woman's right to choose. Davis' infamous filibuster and Sebelius' connection to Obamacare make them pro-life Voldemorts. It doesn't matter that neither the tweet nor the Facebook post mention any approval of the two women's stances, tacit or otherwise. The mere mention of women connected in any way to abortion rights is endorsement. There is no room for disagreement or even nuance in PLW's world. The Waco area is littered with billboards declaring absolutes. "Abortion is always the wrong choice," reads one. "Planned Parenthood steals souls," reads another.

Pisciotta has bought into the conservative charge that the Girl Scouts of the USA is in bed with abortion rights groups – accusing them of promoting pro-choice advocacy groups, distributing brochures for Planned Parenthood, and making sexually inappropriate content available to its members. With such brimstone, it is easy to see how a Girl Scout tweet could be viewed as a leftist screed. The trouble is, the charges wilt under the spotlight. The GSUSA even has a FAQ page devoted to clearing up misconceptions.

But this isn't really about facts. It isn't even grounded 100% in the abortion debate. It is telling that Pisciotta and Pro-Life Waco deem reproductive choice as a "celebration of fornication." The PLW website is full of language outlining Madonna and whore. Planned Parenthood is listed as "Planned Promiscuity;" chastity-based education is listed as the only acceptable version of the birds and bees. If an unmarried woman needs reproductive services, too bad. The only "Christian" response can be judgement. Simply, it's an issue of control – of women and girl's opinions, sexuality, choices, and food. Even within the polarized confines of the abortion debate, that's a tough cookie to swallow.