This Sunday's match-up between the Denver Broncos and Seattle Seahawks may be Super Bowl XLVIII for the National Football League, but it's Super Bowl I for fans from each state – the first two in the country to legalize pot for recreational use by adults.

And while the two teams are battling it out inside New Jersey's MetLife Stadium, pot-law reformers and their foes will be battling it out, via billboard, outside the stadium.

On Jan. 28, the Marijuana Policy Project, which provided financial backing for the successful 2012 legalization initiative in Colorado, announced that it had designed five billboards for posting outside the stadium that highlight the costs of marijuana prohibition (for both the general public and for NFL players) and that assert that marijuana is a safer substance that alcohol. 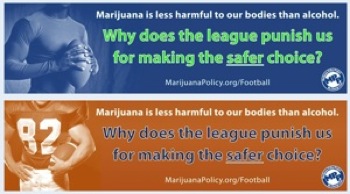 Not to be outdone, the new anti-legalization group Smart Approaches to Marijuana – started by former U.S. Rep. Patrick Kennedy after the historic 2012 votes – a day later, on Jan. 29, announced that it too would be launching an "anti-marijuana" Super Bowl billboard that will be posted at four sites near the stadium.

Courtesy of Smart Approaches to Marijuana

Pot is just bad, SAM contends: It's addictive, saps motivation, and leaves losers in its wake. Though initially billed as a group that supported neither demonization nor legalization, SAM now seems to have taken on the prohibitionist role that others have long advocated. "This country is on the brink of creating a massive marijuana industry that will inevitably target teens and other vulnerable populations," said Kevin Sabet, a former advisor to the nation's drug czar in the White House Office of National Drug Control Policy, who is one of the principles in SAM. "It's time to clear the smoke and get the facts out about this drug." According to the SAM website, those facts are that marijuana is addictive, reduces IQ, and "contributes to car crashes."

Not surprising, the folks at MPP disagree. Completely. And they counter that even Kennedy acknowledged in a recent TV appearance that alcohol is more dangerous than marijuana. Just so everyone knows it, MPP announced Jan. 30, that it would respond to SAM directly – via two additional billboards.

"If Mr. Kennedy is concerned about public health and safety, and he knows that marijuana is less harmful than alcohol, why does he prefer adults to drink?" Mason Tvert, MPP's communications director, asked in a press release. "Our society recognizes that adults should have the right to consume alcohol responsibly. Prohibiting those same adults from using a less harmful substance is not a very smart approach to marijuana."