As scandals go, Wendy Davis' biography-gate ranks near a Michelle Obama fist bump in its molehill building. It's more evidence of the rampant political sexism than an indictment of character. For proof, one need look no further than SeekingArrangement.com. Never one to miss a marketable moment, the cyber pimps have given Wendy an “endorsement.” 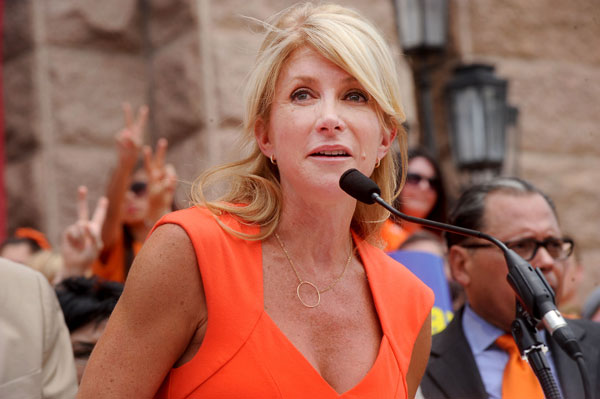 Seeking Arrangement’s press release is a bald bid for publicity. But it is telling in its focus. Of all the minor biographical inconsistencies exposed in Wayne Slater’s original article, one aspect has been luridly magnified – Wendy’s relationship with her second husband, Jeff Davis.

Regardless of the version of the Davis biography one believes, it is clear that Jeff played a role in Wendy’s success. His contribution, of course, was no different than thousands of spouses, both male and female, who share financial resources in the context of a partnership. But to ask men’s rights activists and the GOP faithful, the whole marriage was a Machiavellian scheme hatched by a money-grubbing siren. In this scenario, poor Jeff crashes on the rocks. His only function in this story is in writing the checks.

Pundits were quick to dress Jeff up in a Daddy Warbucks tuxedo. Mike Huckabee caused a mini-scandal by asserting that the Democratic party was painting women as “helpless without Uncle Sugar coming in and providing for them a prescription each month for birth control because they cannot control their libido or their reproductive system without the help of government.” Ann Coulter joined in, accusing Wendy of “being on the make.” And South Carolina GOP heavyweight Todd Kincannon went straight for the rimshot.

Which brings us back to Seeking Arrangement's press release. Compared to the political circus, it is relatively tame. In a bit of Father Knows Best concern-trolling, it even starts off sounding well-intentioned. “The single mother demographic has become a popular scapegoat for modern poverty," it explains, "Many young mothers do not have strong support networks, and therefore have to rely on government programs and historically lower wages to get by, which is not always enough.”

Some may say the answer to that inequality is to provide greater educational opportunities or to pass the Lilly Ledbetter Fair Pay Act. Not Seeking Arrangement. The site's creepy paternalism boils down relationships to very dry transactions. “Some single mothers, like Texas gubernatorial candidate Wendy Davis, are finding a new way to secure financial stability through wealthy benefactors.” Meet Wendy Davis – Harvard graduate, successful lawyer, Democratic heavyweight, and courtesan.

The site doubles down on its take that Davis was a gold-digger. “Wendy Davis is proof that the sugar lifestyle is empowering. It can take a single mom from squalor to scholar, or in this case from the trailer park to Harvard, and a seat in the Senate,” said Seeking Arrangement CEO Brandon Wade. “The sugar lifestyle creates an opportunity for women to transcend the single mother stereotypes.” Wade did not mention that this is primarily done through buying into a whole new set.

The unspoken narrative is that Davis does not really deserve her current status as feminist hero. And it follows the same thinking as an attack site that surfaced after her filibuster. Davis is conventionally attractive and has been romantically involved with men. Thus, according to conservative chatter, she is an interloper in the angry mob.

Never mind that the story is complicated. Never mind few political candidates have had anything close to a hardscrabble life. Forget that the original issue was that Wendy's story might be heavy on folklore. The fact used to discredit Davis is that she was afforded help. Ergo, she must be hoodwinking "real" feminists.

To those who have a decision to make and not column inches to fill, that accusation rings hollow. Davis’ likely gubernatorial opponent Greg Abbott supports real policies that hurt real women. Davis has consistently voted for women's health. One wishes that Davis did not provide fodder, but the truth is that the distraction has more to do with her gender than her biography. Sadly, it's familiar terrain for all female candidates. It's a clear indication that misogyny still can win political points. No spoonful of sugar will help that medicine go down.