Brown vs. Eckhardt vs. … McCombs? {Update} 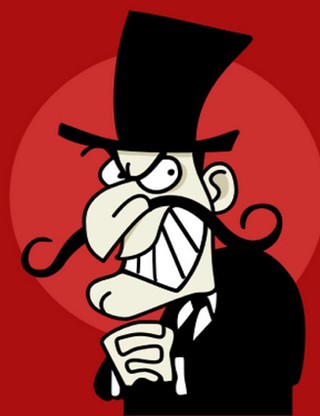 Snidely Whiplash: No known relationship to the county judge campaign, but a real bad guy

Some Travis County voters were receiving a brief computerized push-poll phone survey Thursday night, from a yet to be identified polling firm called something like "Civitas Research."* There were only a couple of substantive questions – both implying that Brown is somehow in bed with Circuit of the Americas owner Red McCombs. {See Update below.}

The computer asked first if the respondent is a likely Democratic primary voter. A "yes" response evoked the following question: ""Would you be more or less likely to support Andy Brown if you knew F1 business associates and lobbyists such as Republican Red McCombs were big supporters of his campaign?"* Possible responses were yes, no, or no effect (on your vote).

That question was followed by (since confirmed as accurate by Eckhardt campaign): "Would you be more or less likely to vote for Sarah Eckhardt if you knew that she opposed all incentives for Formula One?" with the same possible responses.

That was it. It seemed fairly likely that this was a negative "push-poll" by the Eckhardt campaign, not only because the questions were implicitly favorable to her, but because a few days earlier, the campaign had distributed a press release attacking McCombs and the state tax incentives that were granted to Formula One's Circuit of the Americas in Southeast Travis County, and reminding people that Eckhardt had opposed those incentives.

But Brown wasn't mentioned in the press release, and it remains entirely unclear what, if anything, McCombs has to do with the county judge campaign.

Newsdesk wasn't helped much by Eckhardt campaign manager Nick Hudson, reached late Friday afternoon. Hudson said the campaign had indeed done a phone survey, and was "very pleased with the results." He said further information about the results would be released next week.

Asked what relationship McCombs has with the county judge race, or if he had evidence of any relationship between McCombs and the Brown campaign, Hudson simply repeated, "We'll have more information for folks available next week."

Brown campaign manager Jim Wick confessed to being puzzled initially by the Eckhardt press release about McCombs, adding, "We have not had any contact with [McCombs]."

"We thought it odd that the Eckhardt campaign launched a salvo against him," Wick said, "given that he is not a supporter, donor, or anything else in this race." Asked specifically about the push-poll, Wick said, "This attempt to tie Andy Brown to F1 interests is ridiculous, and totally groundless. Our campaign hasn't had any contact with Red McCombs. Any attempt to try and create a link is clearly just trying to smear Andy with an issue that's unpopular with Austinites and residents of Travis County."

Eckhardt's anti-McCombs mini-campaign, of course, coincided with the headlines describing the used-car tycoon's unhappiness over UT-Austin's hiring of a new football coach (Charlie Strong) instead of somebody (Jon Gruden) McCombs preferred. The controversy didn't win McCombs many friends on the Forty Acres – although reportedly Strong and McCombs have since patched things up.

What any of that has to do with the county judge race remains a mystery - which could of course be resolved next week with the release of "more information" from the Eckhardt campaign. In the meantime, voters might ask themselves this question: If you knew Sarah Eckhardt sponsored a push-poll implying falsely that her opponent is corrupt and for hire by an unpopular billionaire, would you be more or less likely to vote for her?

After this story was initially posted, Eckhardt campaign manager Nick Hudson – who had initially declined to answer questions about the poll – phoned to provide a more precise version of the initial McCombs question (now quoted above), and provide additional negative information about McCombs and to argue that Andy Brown's campaign is receiving (yet unspecified) support from "representatives of Red McCombs and COTA." Presumably, Hudson will have more to say (and Newdesk will have more to report) about those allegations next week.

Hudson also insisted, "What we conducted was not a push poll. It was a survey of likely voters." Hmmm. If it quacks like a push-poll . . .

It also turns out that our initial connection of the poll itself to "Civis Analytics" was a mistake based on fragmentary information. We've since been informed by a representative of the Chicago-based firm that they're not working in Travis County during this election cycle. The Eckhardt campaign was asked for the name of the firm it was using for the poll on Thursday night (briefly and virtually unintelligibly identified on the phone), and has yet to answer that question. Perhaps the answer will be forthcoming next week, along with the rest of the additional information. 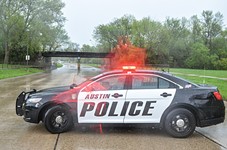