Peas in a Pod

It's another day in Texas. Gov. Rick Perry is wiping his glasses on Anita's scarf. Big Tex is standing tall, pretending not to notice the birds on his shoulder. And at least two Texas politicians are making outrageously homophobic remarks. Ah, the peaceful calm of winter. 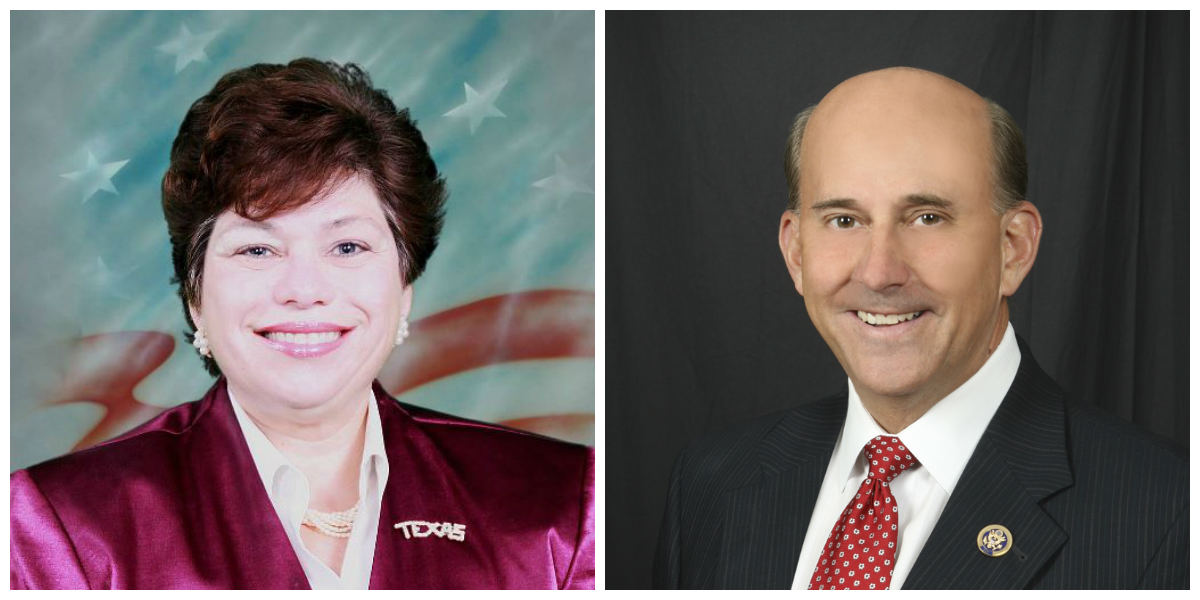 First up was legislative punch balloon Louie Gohmert. Speaking at a Heritage Foundation event, the U.S. Rep. decided to chime in on the recent court rulings in support of marriage equality. According to Roll Call, Gohmert paraphrased the rulings as akin to the judges saying, "Basically, we haven't seen any biological evidence to support marriage being between a man and a woman." Ever the quick wit, he poo-poohed that line of thinking. The judges, Gohmert said, "need some basic plumbing lessons."

Get it? The turkey necks must have been flapping in delight. Of course, no thought was given to the fact that, whether during heterosexual or homosexual coitus, things have gone horribly wrong if you encounter a manual gas shut-off valve. If their god-fearing minds were going to be in the sewer, it would be the sewer of mid-Eighties Cinemax.

But even Gohmert's typically impressive juvenilia this week took second place to a State Board of Education candidate. Lady Theresa Thombs, last seen battling Satan over the last slice of pepperoni pizza, has announced support for the "straight pride" movement. The movement has in the past year gained traction with socially conservative reactionaries fed up with heterosexuals only being represented on TV, film, and music 99% of the time instead of the natural order of 100%. 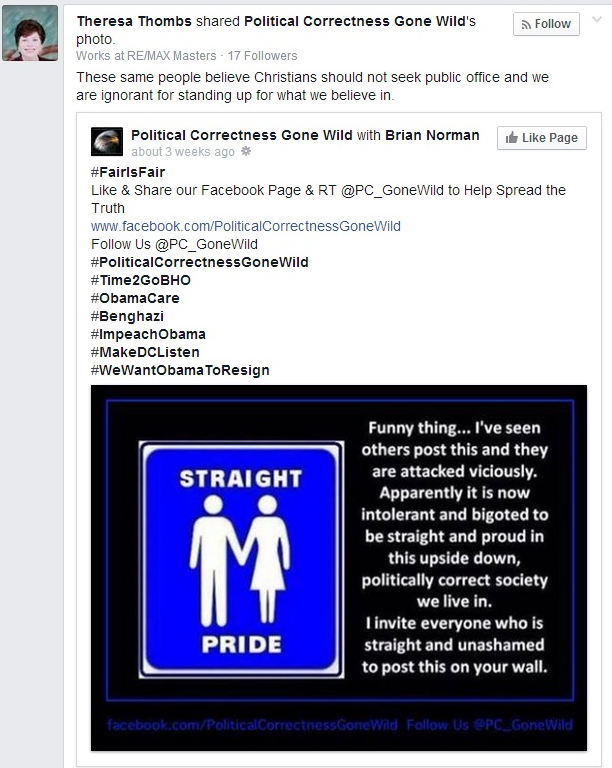 Thombs posted a since-deleted conservative meme featuring male and female stick figures holding hands – the kind usually featured outside restrooms. The text read, "Funny thing … I've seen others post this and they are attacked viciously. Apparently it is now intolerant and bigoted to be straight and proud in this upside down politically correct society we live in." Thombs added her two cents, "These same people believe Christians should not seek public office and we are ignorant for standing up for what we believe in."

After a slew of comments questioning the idea of believing in straight oppression in a world where Nascar exists, Thombs felt the need to defend herself. Thombs insisted she does not have a homophobic bone in her body. Certainly she thinks the gays should be driven into the fiery pits of Mordor, but she really, truly loves the LGBT community.

"We are not bigoted or hateful," Thombs tweeted. "Jesus said to love the sinner but hate the sin. God gives you free will to do what you want. But murder is a sin, but even a murderer is loved and forgiven if he asked to be. We both have the right to believe the way we choose is all I am saying."

Thombs was just trying to make a point about political correctness in this upside down world. The world is so topsy-turvy that gays and murderers are being celebrated despite all the well-publicized sinning. Surely, everyone gets the comparison. Most of the articles said Elton John killed at Zalgiris Arena. Why isn't anyone talking about all the mayhem?

With such a limited world view, Thombs' bluster may well be a reaction to a world she no longer understands (wait, people don't wear shoulder pads anymore?) In decrying the backlash, she certainly misunderstands free speech as being freedom from repercussions. Anti-gay rhetoric like hers and Gohmert's will not stop the momentum of the U.S. LGBT equality movement, but may earn them a guest spot on Duck Dynasty. If RE/MAX wants to fill its balloon with her particularly noxious hot air – so be it. But they shouldn't be surprised when they wake up and it is already another day.