New Section 4 would put Texas back under preclearance

US Rep. Jim Sensenbrenner, R-Wisconsin: "I knew the Voting Rights Act must be fixed before the next election."

Last Summer, the US Supreme Court defanged the Voting Rights Act by striking down Section 4, the clauses defining which states must seek Federal preclearance for election laws. Now a new bipartisan Section 4 has been filed, and it would once again place Texas under Department of Justice scrutiny.

The legislative hole was created in June when SCOTUS ruled in Shelby County v. Holder. At the time, this was seen as a test case for the whole preclearance mechanism defined in Section 5 of the VRA. Instead, the justices left Section 5 in place, and instead voted 5-4 to rule the lesser-known Section 4 unconstitutional. That's the language that defines what sins against democracy a state must have enacted to be placed under preclearance, and how long they must keep a clean sheet before coming off the offender list.

At the time, Chief Justice John Roberts wrote that, while the VRA was still valuable, the terms of Section 4 no longer reflected modern political realities. However, he wrote, "Congress may draft another formula based on current conditions."

Seven months later, the Voting Rights Amendment Act of 2014 is being introduced by a bipartisan alliance: Sen. Patrick Leahy, D-Vermont, and Reps. John Conyers, D-Michigan, and Jim Sensenbrenner, R-Wisconsin. It creates a whole new Section 4, with new definitions that the authors hope will fit the SCOTUS ruling.

Calling this "modernized VRA … constitutional and bipartisan," Sensennbrenner said, "This legislation is a direct response to Shelby County v. Holder. When that ruling came down last summer, I knew the VRA must be fixed before the next election and any solution must be politically palatable while complying with the objections of the Supreme Court."

For Conyers, this is a return to an old battleground: As the ranking Democratic member of the House Judiciary Committee noted in a statement, his first vote of consequence when he joined congress was for the original Voting Rights act. He said, "Although the Shelby County v. Holder decision struck at the heart of the Act, today, it is with much pride that my colleagues and I are introducing a strengthened and renewed Voting Rights Act to reaffirm our constitutional commitment to the cornerstone of our democracy: the right to vote."

Historically, Congress has been supportive of the VRA: Even under the presidency of George H. Bush, it was reauthorized with overwhelming bipartisan support. However, when it comes to the specifics of a new Section 4, bipartisanship may mean far less than geography. Under the new definitions within Section 4, four states southerly of the Mason-Dixon – Georgia, Louisiana, Mississippi, and of course Texas – will be required to get federal preclearance for redistricting and voter regulations.

Therein lies the terrible balancing act that will plague the bill's passage. Its authors will inevitably need Republican backing to get the measure passed, and taking some states out of the list improves their chances of getting any language passed. However, soften too much, especially in an era when states like Texas have passed restrictive voter ID laws, and Democrats will back away. 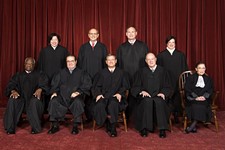