If there is one thing that Texas politics needs this year, it is a touch of class. Last year was marred by potty talk and petty squabbling. One couldn't help thinking that the whole state needed a dab of polish and a pat of elbow grease to make that silver shine again. 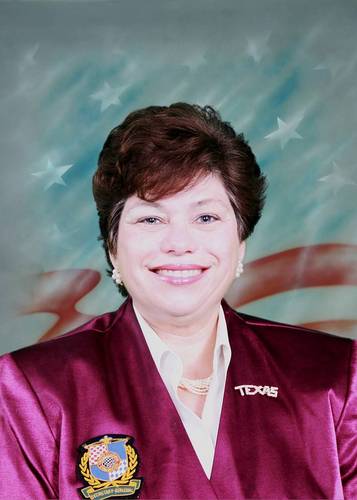 Luckily, this year we have Lady Theresa Thombs running for the State Board of Education. As a RE/MAX realtor, songbird, and a Dame of Justice, Thombs is hellbent on bringing civility back to the democratic process – turning back the clock to a time when "Jesus" wasn't just something said after stubbing one's toe.

Take last week's bravura performance at a Tarrant County campaign forum. Lady Thombs waltzed through the proceedings with aristocratic politesse, never bowing to the pressures of dirty politics. As befitting a lady, her bon-mots were on par with Downton Abbey's Dowager Countess.

According to the Fort Worth Star-Telegram, she began the evening by accusing incumbent Pat Hardy of being a "lifelong Democrat." Then, she ever so gently moved on to challenger Eric Mahroum. "His real experience in management," she quipped, "is Chuck E. Cheese." She reminded the crowd that Mahmoud had once fallen behind on child support. The only thing keeping the crowd from mass swooning was the lack of fainting couches.

She then went on to describe her education philosophy. History, she said, should be written by “experts, not people from some socialist higher education,” adding, "We know we didn't come from monkeys!" On her website, she elaborates that her "main goal" is "to return to the basics of education where reading, writing, mathematics, and science basics are emphasized rather than social agendas and ideologies." Until recently, those last two words were written as “adgendas" and "ideoligies."

Perhaps they didn't teach spelling at Cheltenham? But Thombs seems to take it all in stride.

Indeed, her lack of spelling prowess seems to be a source of pride. repeatedly over the weekend, she linked to a Mental Floss listicle of 11 historical figures known for their alphabetical goofs. Tellingly, former vice presidential aspirant and "potatoe" farmer Dan Quayle was number 11.

Rest assured, frequent typos will not be defining her campaign. To Thombs, the stakes are too high. As the news of last week's candidate forum became more widespread, Thombs found herself trading in her satin suits for Joan of Arc armor. Earlier in the week, she warned, "We have Devil worshipers who cannot wait to vote. Like I said to the liberal grannie who thinks the Devil is right. Christians will win."

Thombs reminds her followers that the key to the Christian victory will be prayer. Using tirelessly researched propaganda techniques, she discusses her tactics with provocative sentence fragments.

But in the end, she might have to resort to heavy weaponry to win the battle for Texas children. Her camp has even been fine tuning a long range acoustic device. Don't worry m'lady, we hear you loud and clear.