Turning Back the Clock on Reproductive Rights

Lawmakers in 39 states passed a whopping 141 provisions related to reproductive health in 2013 – half of which sought to further restrict access to abortion, including in Texas, where the consequences of the controversial House Bill 2, passed during a special-called session, have only begun to be felt.

Indeed, the potentially negative impact of the law has prompted three Austin city council members to write to Congress to urge support for legislation that would ensure women's access to reproductive health care, and to Texas lawmakers asking that they repeal HB 2. "We urge Congress and the Legislature of the State of Texas to protect each woman's health, her right to determine whether and when to bear a child, and her ability to exercise that right," Mayor Pro Tem Sheryl Cole, and Council Members Laura Morrison and Bill Spelman wrote in a Jan. 7 letter. 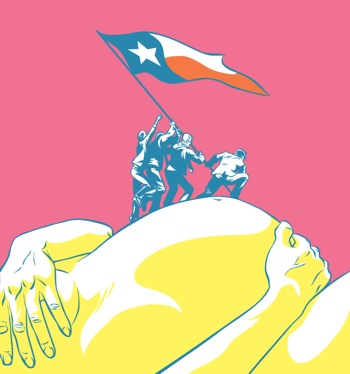 According to a new report from the Guttmacher Institute, 22 states enacted 70 abortion restrictions last year, making 2013 second only to 2011 in the number of new restrictions enacted in a single year (indeed, Texas contributed to the tally that year as well, notably with passage of the state's ultrasound-before-abortion law). In all, more abortion restrictions were enacted over the two year period than were enacted during the entire previous decade, Guttmacher reports. 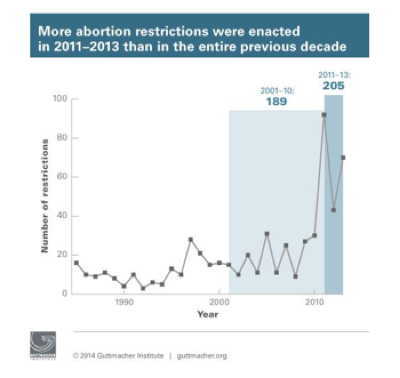 Texas and North Dakota, by virtue of having legislatures that did not meet in 2012, led the charge toward greater restrictions in 2013, according to the report. HB 2 alone contains four controversial restrictions: a ban on all abortions after 20 weeks; a restriction on pharmaceutical abortion; a requirement that all abortion doctors have hospital admitting privileges within 30 miles of each facility where they provide care – a provision currently being litigated in federal court; and a requirement that by the fall of 2014 all abortion clinics meet standards required of ambulatory surgical centers, which include elaborate, and expensive, physical plant requirements.

The 30-mile admitting privileges provision has already taken effect amid ongoing litigation and has currently led to the closing of at least 10 of 36 licensed clinics across the state. Initially 14 discontinued abortion services, including the only two providers in the Rio Grande Valley. Three facilities, each in urban areas, have since restored operations. Once the ASC regulations take effect, advocates worry that all but six clinics, those already configured as ASC operations, will also close. (The Department of State Health Services says it is aware of plans to construct three new abortion-providing ASCs, which could bring to nine the total number of clinics almost certain to remain open after Sept. 1, when the new regulations take effect.)

The type of restrictions embodied in HB 2 are among the most common enacted in 2013. Eight states adopted restrictions on medication abortion – including adherence to an outdated protocol for its administration, as is the case in Texas and Ohio. Eight enacted so-called targeted restrictions on abortion providers, or TRAP regulations, such as the ASC and hospital admitting privileges requirement. And three states enacted flat out bans, such as HB 2's 20-week ban.

The proliferation of restrictions on reproductive rights has prompted some push back. In November, 94 Democratic U.S. House members joined California Rep. Judy Chu in filing the Women's Health Protection Act of 2013, which would prohibit any government from passing laws that single out abortion providers or patients for greater scrutiny – including a limitation on the ability to pass laws that would regulate clinics like ASCs, would mandate extra ultrasound examinations, or would require women to make additional visits to abortion providers prior to obtaining care, for example. The bill has been referred to a subcommittee, but has not yet been scheduled for a hearing. Veteran Texas Dem Reps. Sheila Jackson Lee and Eddie Johnson have signed on as co-sponsors, as have freshman Reps. Marc Veasey and Beto O'Rourke. An identical bill was filed by Sen. Dick Blumenthal, D-Conn., and now has 33 co-sponsors, none of them Republican. The Senate version has also been referred to committee.

Among those urging passage of the measure are Cole, Morrison, and Spelman, who wrote this week that the WHPA is "necessary to protect Austin residents and those who may come to Austin to receive health care," reads the letter. When Texas passed HB 2 "we knew Austin residents could be harmed by it," they wrote. "Because women of reproductive age live in Austin and deserve equal access to comprehensive reproductive health care, we believe federal legislation limiting government interference with the delivery of the full range of reproductive services is necessary to ensure that women in all states have equal access to these services." Lawmakers in Washington, D.C. should pass WHPA, they write, and Texas lawmakers should repeal HB 2. "As City Council Members, it is our duty to protect our constituents."

The local officials' decision to wade into the fray was championed by the Center for Reproductive Rights, which touted the letter in a Tuesday press release. The CRR is currently at the center of litigation over the hospital admitting privileges, which it argues is unconstitutional. "Laws like those recently passed in Texas have relegated far too many women in the U.S. to a second class of citizens whose rights and access to essential health services are determined by where they happen to live," Nancy Northup, CRR's president and CEO said in the press release. "We call on elected officials all across the country to follow the lead of these Austin city council members and support women's rights and health by urging Congress to pass the [WHPA]."

Austin's officials are the first to do so, a spokeswoman for CRR said, but more are expected to join their ranks in the coming weeks.