UPDATED: Too Close for Comfort

Gay Victoria couple gets kicked out of club for two-stepping 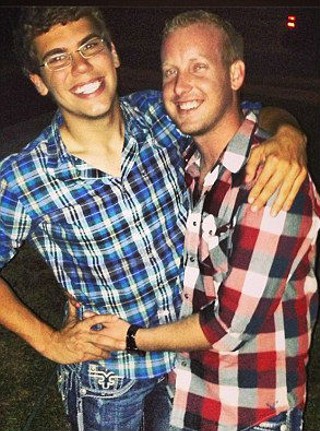 It was bound to have happened. As the country-western line dancing trend died down, things began to grow scandalous. Some people even started touching, rolling around like Burt Lancaster in From Here to Eternity. Emboldened, a gay couple took a spin at Victoria's Cactus Canyon. Club staff couldn't sniff the smelling salts for the sulfur.

According to the Victoria Advocate, Justin Meyer and his boyfriend, James Douglas, were dancing to Dustin Lynch's "Cowboys and Angels" Dec. 21 when a member of the club's staff informed the couple that same-sex boot scootin' was a violation of the Cactus Canyon safety policy. Apparently, every time man hands touch man hands in a swirling promenade, all sorts of calamity happens. On a previous occasion, the trough-style urinal was clogged with the great dragon's blood. And that was just because two guys accidentally brushed arms.

The incident soon became an altercation when Douglas reportedly asked the club rep why two women were allowed to country dance together, but they were not. He assured the manager that the couple could handle themselves should homophobia rear its head. Although no answer was forthcoming, Meyer was allegedly told that he could dance with his boyfriend to some musical genres, like hip-hop. Indeed, Meyer says the couple often grinded to Major Lazer's "Bubble Butt," presumably an ode to Grindr's most popular physical attribute.

That's when the Cactus Canyon story gets prickly. The couple was asked to leave. Club Director of Operations Robert Dillender told the Advocate that Meyer was "disruptive," poking a club manager in the chest. Meyer denied those charges, assuring the Advocate that no poking took place.

Meanwhile, Victoria City Attorney Thomas Gwosdz says the city is not getting involved and has not considered any sort of nondiscrimination ordinance. Although the American Civil Liberties Union of Texas plans to step in, there is no statewide law protecting LGBT Texans from discrimination in public spaces.

Still, the story may have a happy ending after all. At least one local watering hole may be getting some new clientele. When the Advocate asked other nightspots if they had a policy against same-sex dancing, Two-Step Nightclub and Lounge President Bryant Price offered an invitation of sorts. Maintaining his bar has a "number" of LGBT regulars, Price said simply, "We don't do that at our club."

UPDATE: James Douglas reached out to the Chronicle after this story was published with further details of what happened that night. Douglas says that he and Meyer frequented Cactus Canyon several times a month, but had never danced to a country song prior to that evening. When they observed another male couple dancing, they decided to take to the floor as well.

According to Douglas, they were able to dance for four songs before the manager pulled them away. Douglas says that club management explained they couldn't dance together "in the event another patron was to attack because they were offended," claiming "[the club did not] have enough security to protect us."

When Douglas spoke to the club's general manager, he says she told him "I'm not getting into this. I'm not going to answer any other questions." After Douglas closed the bar tab and the couple were standing at the edge of the bar property, two police officers walked up. Douglas says the manager told the cops "I want them gone, and issue them criminal trespass warnings." The warning means that the couple risks arrest should they return to the Cactus Canyon.

Douglas also takes issue to Dillender's characterization of the incident, saying there was no physical contact involved in the disagreement. He believes the Dillender's statement regarding TABC law to the Advocate is a smokescreen, noting that a similar incident happened in 2011.

The incident, however, is prompting some good. The owner of the Two-Step reached out to the couple via Facebook, telling the pair that they are welcome at any time. As a testament to tolerance, the Two-Step is planning an evening to benefit local organization GLBT Victoria.