A funny thing happened with the rise of "post-PC" shows like Family Guy and South Park. The same racist tropes that get news personalities fired or in hot water get a pass when said with a wink. Never mind the objections of persons of color. When it comes time to define racism, our culture gives white men the final say. 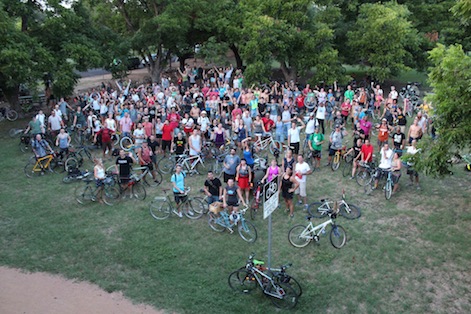 The theme, "Indians and Pilgrims," is helpfully annotated with the suggestion to "bring blankets." In the occasionally brisk Austin autumn, that may be taken as a helpful reminder to be prepared for colder weather. Or to the more historically inclined, it could be taken as a reference to the ignoble Siege on Fort Pitt, where British soldiers attempted to drive back an American Indian rebellion with smallpox infected blankets.

Stop being so sensitive, folks. It's only genocide.

Unfortunately, the Facebook thread became ugly in a matter of minutes. Brannum shot back, pointing out that defensiveness is common when privilege is threatened.

Her comments were not exactly greeted with self-examination. More commenters jumped in the fray, discounting the suggestion that cultural appropriation could ever be offensive. Why dressing up as Native Americans is no different from trying a hair braid inspired by The Sound of Music or wearing a tartan scarf. The media may be lately saturated with stories of appropriation snafus – Urban Outfitters being sued for marketing a "Navajo Hipster Panty," Victoria's Secret apologizing for including a war bonnet in its sexy, sexy annual fashion show, and Paul Frank backing down from a neon-splashed "Dream Catchin' Pow Wow" – but no one reads blogs in Austin. Perhaps tiring of Native American jokes, some commenters thought they would throw some new ingredients into the appropriation stew. Why offend one culture, when it's hip to be an "equal opportunity offender?"

And, of course, there was the obligatory reference to a smidgen of Native American heritage, the "some of my best friends are black" of cultural appropriation red herrings.

Notably, this isn't the first time Social Cycling Austin landed on a sketchy theme. Their April 2010 theme was "The Haaaay Ride," "hilariously" cashing in on Brokeback Mountain.

Still, it does not look like Brannum's objections will have any sway. When asked for comment, one of the organizers, Keith Byrd, dismissed the controversy.

"Not much to say. We've done this bike ride on Thanksgiving for years now. It's a small bike ride with friends that is about fellowship and pretty much looks like what goes on in practically every elementary school thanksgiving pageant across the country, but with bikes. I'm surprised this is news."

UPDATE: Social Cycling Austin has changed the theme of the November ride.