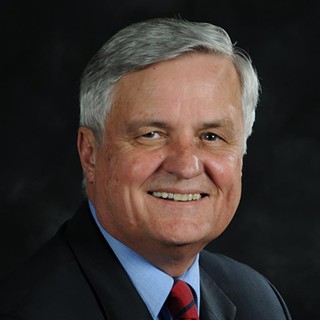 Tom Pauken: Not in it, can't win it

Politics is often about fighting losing battles. But what's the point, if you can't even get on the battlefield? That's the thinking of former Texas Workforce Commission chair Tom Pauken, who is saving his filing fee and will not be running for the Republican nomination for governor.

In a statement issued late yesterday, Pauken said, "I can no longer in good conscience ask friends and fellow conservatives to continue to help me when there appears to be no realistic path to victory."

The reason is simple: As the board stands, he doesn't stand a cat in hell's chance of beating the GOP's presumptive nominee, Attorney General Greg Abbott.

Not that he hadn't tried. Ever since declaring, he'd sniped hard at the gubernatorial heir apparent, attacking him from that narrow strip of political land on his right. The former Goldwater organizer and Reagan-era White House staffer attacked Abbott as an institutional roadblock to real conservative reform. His assaults came usually as quasi-rhetorical questions, asking why his opponent wouldn't clarify his position on issues like the DREAM act or toll roads. Smartly, Abbott refused to be drawn into the argument, leaving Pauken shadow boxing.

The end result was a campaign going nowhere, and not doing that particularly fast. In his exit letter, Pauken broke down his problems. He had set three targets: Raise $2 million; Build a statewide organization; And get a solid social media presence. None of that was happening.

He'd also been fighting a losing battle with the press, which is already looking forward to the big inter-party fight next November. As he wrote, "The media depicts this as a Greg Abbott v. Wendy Davis race." With most outlets treating the GOP primary like a done deal, Pauken was left out of the coverage. In fact, he was getting beaten out on column inches by even more marginal candidates like sometime Fox News talking head Lisa Fritsch.

In his exit note, Pauken explained to his supporters that it had become clear over Thanksgiving that this dead horse had taken enough of a flogging. He wrote, "Clearly, my message has not resonated with enough contributors, party leaders, and grassroots conservatives to show a pathway to victory. I wish it were otherwise. I believe my message is the right one to bring Texans and Americans together for the good of the country, but perhaps I am not the right messenger – or, it is not the right time."

However, don't expect him to rush to endorse Abbott. In a final blast, he jabbed his establishment opponent, writing, "We have to end this cancer of insider cronyism which infects both parties as government becomes more our master, rather than our servant."