Every year, there are a few moments in Texas politics when arguments fold over themselves like a runny omelet made by a short-order cook. Conspiracy-minded commenters and extremist bloggers float a red herring, Breitbart spins as fact, and state Republicans sound the dog whistle to those same believers.  Crack, sizzle, flip. 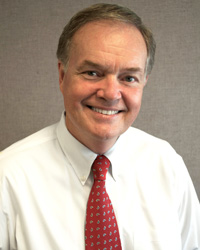 So it's no surprise when railroad commissioner candidate Wayne Christian would sell the closure of a lead smelter in Missouri as an attack on the Second Amendment. But that does not make it any less mendacious.

In a fundraising letter sent out this morning, Christian outlines his latest treatise on why President Obama is a bad, bad man. The Tea Party candidate starts with a little gee whiz populism.  “If I have learned one thing during the Obama Presidency,” Christian says, “it is never say never.” Why, since Obama became president, rivers of blood have contaminated our nation’s water supply, cats have been serving tea sandwiches to dogs, and Kim Kardashian has become a household name. It’s all because of our federal puppetmasters. Obvi.

Christian clarifies, “5 years ago, who would have thought a government takeover of both the medical and financial industry was possible in this country? Who would have speculated we would be over $17 Trillion in debt? Who could have imagined that the IRS and NSA could be used to target innocent civilians because of their political and religious beliefs?”

America is not a nation of soothsayers, looking at crystal balls and reading tea leaves. We were all so naive before Obama took office, like Jodie Foster in her Coppertone ads.

“As ridiculous as it sounds,”  Wayne ridiculously continues, “it now looks as though now the Obama Administration is using the EPA in a backdoor attempt at eroding our Second Amendment rights. At the end of this month, due to new environmental regulations, the last lead smelter in the United States will close its doors, meaning lead for traditional ammunition will have to be imported - driving up the cost of ammo around the country.”

Alarm! Panic! Shock! How dare he! In truth, he didn’t. The Christian email helpfully links to a Breitbart article that further expounds on the latest Obama transgression. Militaristically named reporter AWR Hawkins writes that the Doe Run Company in Herculaneum, Missouri  – “the last U.S. smelter of its kind”  – will be closing at the end of the year because of new EPA lead air quality standards that were passed in 2008.

2008? Wasn't that before Obama was sworn in? In fact, the report that lead to the new lead standards was published in May 2008. That was even before Hillary Clinton gave her concession speck in the primaries. George W. Bush was still in the White House, probably painting portraits of Guantanamo detainees wearing the Heart of the Ocean diamond.

Indeed, the new standards have nothing to do with gun control. The Doe Run smelter is a major lead polluter. In 2001, the CDC's Agency for Toxic Substances and Disease Registry tested children under six in the area for lead. In a quarter mile radius from the smelter, a staggering 56% of those kids had high levels of lead present in their blood. In fact, the new air quality standards were spurred by a lawsuit filed against the EPA. The town of Herculaneum was not concerned about bullets killing their children; they were concerned about the raw component. 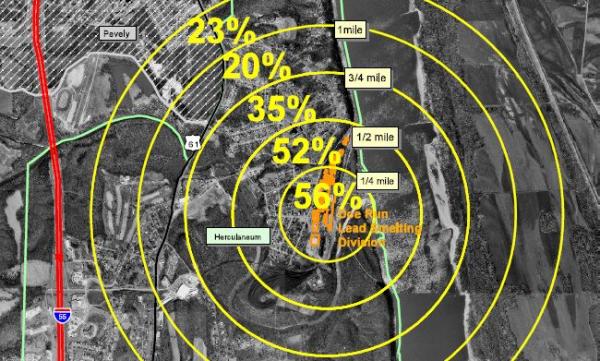 Photo by Missouri Department of Health and Senior Services

But why explain all that when it's time to rile up the base? Christian calls the smelter closure part of "radical attacks from the left." PolitiFact Florida may have rated Allen West's similar claims "pants on fire," but that has not stopped Christian from loading the debate. " "This is no accident," Christian explains, "Mr. (ahem) Obama has long been an advocate for gun control and when he could not obtain it through the legislative process, he sought an alternative method of accomplishing his goal." We’ll give one thing to Christian. He does know a lot about railroading the truth.