Covino gets a year behind bars 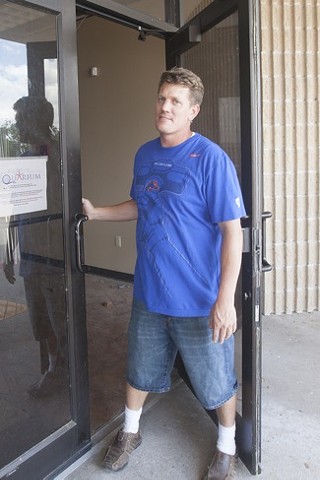 Ammon Covino, outside the proposed Austin Aquarium in August (Photo by Jana Birchum)

On Monday, Dec. 2, just over a week before the new Austin Aquarium is scheduled to open to annual-pass holders, a Florida federal judge sentenced Ammon Covino, one of two brothers behind the new Northwest Austin aquarium, to a year and a day in federal prison for illegally procuring wildlife to exhibit in the first aquarium he opened, in Boise, Idaho.

After his turn inside, Covino, 40, will be subject to two years of supervised release during which he will be barred from any employment that "involves the possession, display, transportation, exhibition, purchase, or sale of wildlife," according to a press release from the U.S. Attorney's Office for the Southern District of Florida.

Covino pled guilty this fall to conspiring to procure illegally from the Florida Keys, for exhibition in the Idaho Aquarium, spotted eagle rays and lemon sharks worth at least several thousand dollars. According to court records, Covino sought to purchase and ship the wildlife without the necessary permits – and when confronted about that by the seller, who reported the encounter to the feds, Covino insisted that the seller just go ahead and provide the animals without the necessary paperwork. “Who gives a shit, man?" Covino asked.

As it turns out, the feds, that's who. Although Covino's attorney asked for a sentence reduction, federal prosecutors weren't having it. Indeed, after his initial arrest in connection with the poaching charges, during which time he was able to talk with the feds about the charge and evidence against him, Covino contacted his nephew Peter Covino IV, asking the younger Covino with help to "eliminate evidence" that would connect Ammon to the charges. That was not an "impulsive reaction to discovering that his criminal conduct had been uncovered," federal prosecutor Thomas Watts-Fitzgerald wrote in a sentencing memo filed with the court last week, but one that "is illustrative of [Covino's] underlying character." Moreover, Watts-Fitzgerald argued to the sentencing judge that Covino's "offense occurred in the context of an industry that is extraordinarily difficult to effectively police and which appears all [too] ready to cut corners and ignore legal requirements to secure additional resources." The financial incentives to do so are great, and to offer a reduced sentence, as Covino had asked for, would "simply trivialize the wrongdoing … and [would] not serve to reduce the potential for recidivism [by Covino] and continued similar conduct by other similarly inclined offenders," he wrote. (Ultimately, per the information in Watts-Fitzgerald's memo, Covino's sentence was set slightly below the 15-21 months specified in federal sentencing guidelines.)

A court order also forbids Covino and his partner in founding the Boise Aquarium in 2011, Chris Conk, from future association with that aquarium. Conk was also sentenced Monday to four months in prison for his role in bringing the lemon sharks and spotted rays to Idaho. Reportedly, Conk had previously pleaded guilty to smuggling protected coral. The nonprofit Idaho Aquarium is now being restructured, according to the Idaho Statesman. The Idaho aquarium is under investigation by the Idaho Humane Society and the Idaho Dept. of Fish and Game, the daily reported. The family's other facility, in Portland, Ore., is also under investigation by the Oregon Humane Society in connection with the alleged mistreatment of animals there.

Although the now-convicted Ammon Covino is listed as a managing member of the as-yet-unopened, for-profit Austin Aquarium, his brother Vince Covino told us in this fall that Ammon would have no role at the new site, aside from the building of exhibits, which was well underway during our October visit to the site on North Hwy 183 near Anderson Mill Road. "Ammon is a talented and creative builder who was assigned with the design and building" of both the Portland and Austin aquaria, Vince Covino reiterated in a Dec. 3 email to the Chronicle. "His actions with respect to the Idaho [s]hark order without a permit are unconnected to Austin Aquarium, which has always had every permit required for our animals," he wrote. "It was never intended that he work at Austin or Portland after opening day. I hired marine biologists and other qualified aquarists to run the aquariums."

But whether the Austin Aquarium has been operating in accordance with the law is an open question. According to city officials, the Covinos began building and storing animals at the roughly 22,000-square-foot former Lack's Furniture Store site before having permits to do so. And even now, with postings to the aquarium's Facebook page that announce it will open Dec. 12 to annual-pass holders and Dec. 22 to the general public, the city has not approved the work done there – meaning the facility has not yet been given an occupancy permit that would allow it to operate legally. And according to the U.S. Department of Agriculture, which regulates the exhibition of protected mammals, the Covinos have yet to submit a completed application to display otters or fur seals, federally-protected mammals that the Covinos intend to show, nor for a kinkajou, also federally-protected, that they have been exhibiting as an enticement for customers to the new aquarium. A preliminary application has been filed, but it contained errors that need correcting, USDA spokeswoman Tanya Espinosa said in an email. To date that has not happened. 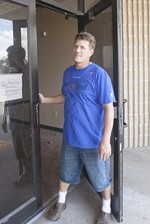