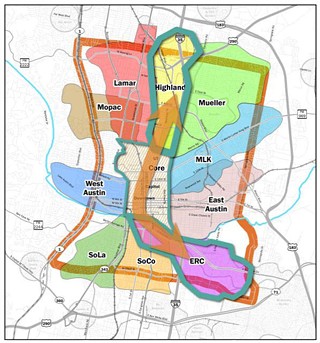 Project Connect, the regional planning initiative within the Capital Area Metropolitan Planning Organization (CAMPO), suggested the East Riverside (south and east on East Riverside Drive) and Highland (north along Red River Street) sub-corridors to be the top prospects of the ten possible sub-corridors under consideration.

At this point, CCAG will review the recommendation and public comments before making its decision, expected in December. While the Project Connect recommendation is not conclusive, it is likely that its recommendations will be chosen for the city’s investment.

Consideration by the Austin City Council, Capital Metro Board of Directors, and Lone Star Rail Board of Directors are also planned for this winter, with the Central Corridor study continuing in January 2014, with greater focus on a identifying a specific project.

Project Connect’s recommendation will be posted on its website for residents to review and comment on. For more information, today’s presentation to CCAG was recorded and will be available to watch online. For those still hoping to provide input, Project Connect is offering an on-line survey and evaluation tool until December 4, which allows anyone to submit opinions to the project team.

To further inform and engage citizens, Project Connect has planned a “Community Conversation” from 7 to 9 p.m. on Tuesday, November 26, which will be available online and televised on Channel 6.

The Project Connect team examined various data and information, including congestion, ridership, affordable housing, growth centers, public opinion and more, before making its recommendation. The central core – which includes The University of Texas at Austin, the Capitol and Downtown Austin – will be the center of the regional system. The core already has Capital Metro’s MetroRail, and plans to add MetroRapid (which will launch in January 2014), Lone Star Rail and express lanes on MoPac and I-35.