The no-hitter king and the Jewish cowboy for ag commissioner 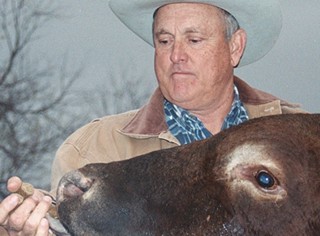 Texas is that nation's leading ranch state. One out of every seven Texans works in or around the farming business, adding $100 billion to the state's economy. So, of course, the debate around who will be the next agriculture commissioner may come down to two musicians and a former pitcher.

There's probably some grumbling over in Kinky Friedman's camp this week: After a brief run as the biggest celebrity in the race to become agriculture commissioner, the erstwhile singer/comedian/salsa vendor/declared Democratic candidate was pushed aside by none other than former Texas Rangers CEO Nolan Ryan. The all-time leader in no-hitters announced last month that he was stepping down from the team effective Oct. 31, and rumors immediately swirled that he wasn't heading into a quiet retirement. Instead, he's purportedly considering a run for agriculture commissioner in the 2014 Republican primary.

Before you start laughing, Ryan could quickly become the lead contender for the GOP nomination. He sunk some of that baseball cash into ranches and has dabbled in ag commissioner politics before. In 2010, he helmed the exploratory committee for then state rep, now ag commissioner Todd Staples. Prior to that, he was vice-president to the Texas Parks and Wildlife Commission, and has sat on the boards of two conservation organizations, the Texas Water Foundation and the Natural Resources Foundation of Texas. He's even been rolled out for a TV ad to back Proposition 6, the proposal to establish and fund a statewide water infrastructure bank.

However, all that may be overshadowed by the fact he used to play baseball.

The post of ag commissioner should arguably be one of the most important in Texas. Politically, it's been one of the great stepping stones. For example, Democrat John C. White left the post in 1977 to become US Deputy Secretary of Agriculture and then chairman of the Democratic National Committee. It's been a great launchpad into statewide office for state reps, with three former members of the lower chamber using it to stage runs for higher office. Rick Perry became governor: Susan Combs replaced Perry before becoming comptroller; And now Staples has his eye on the lieutenant governor's apartment.

Unfortunately, with Friedman and Ryan seemingly in this race, this time around it promises to be little more than a personality-driven side show.

Bringing up the rear in the headline-grabbing is none other than former state rep Sid Miller, a perennial Republican mid-carder most infamous for carrying 2011's mandatory pre-abortion sonogram bill. Run out in the 2012 primaries after an ugly run-off, at least he has some real farming credentials, owning a ranch and tree nursery in Stephenville. But he's got the most ink for bringing redneck chickenhawk and Perry inaugural ball headliner Ted Nugent as his campaign treasurer. Might make it a little hard to atract Hispanic voters with the man that once said that if you don't speak English "you got to learn as fast as possible or get the hell out of America" controlling the purse strings.

Lost elsewhere in the mix is a plethora of unknown candidates: Uvalde mayor J. Allen Carnes and former State GOP Executive Director/failed House candidate/ and sore loser Eric Opiela round out the Republican primary, while Rock Palmquist is the sole Libertarian on the ballot.

Friedman's presence in the race is a double edged sword for Democrats. They need a candidate: If they don't have one in every statewide position, they open the door to ballot access for the Green Party. The GOP has seen its vote share constantly eroded by the presence of Libertarians on the ballot, and Dems have constantly feared that the Greens could do the same thing to them. That issue exploded in 2010 when an out-of-state GOP PAC provided the Greens with the petition signatures they needed to get on the ballot

But, and here's the real problem. it's Kinky. The same Kinky that ran as an independent for governor in 2006, much to the chagrin of Dems who believed his spoiler candidacy (along with that of Carole Keeton Strayhorn) distracted from the real battle between Perry and Chris Bell. The same Kinky that ran an abortive Dem primary campaign for ag commissioner before fundraising for Republicans in 2010. If there needed to be another nail in his political coffin, he endorsed Perry for president in 2011 (and then said he didn't.)

But if not Kinky, then who? So far, Democrats have been extremely gun shy about fielding anyone for any statewide office. The only real name is Sen. Wendy Davis, D-Fort Worth, but there's little sign so far that her entry into the top race has put some metal into the spines of her fellow lawmakers. In fact, the whole Dem primary slate so far is less "who's who" and more "no, really, who?". Lite guv hopeful Maria Luisa Alvarado is most famous for an unsuccessful run for that same office in 2006, and an abortive primary challenge against congressman Lloyd Doggett in 2012. Sam Houston has filed for attorney general, Mike Collier is running for Comptroller, while John Cook is in for Land Commissioner. Bar Davis, none of them hold office.

Speculation is rife that Sen. Leticia Van de Putte, D-San Antonio, might still get into the lite guv race. Unlike Davis, she still has two years left on her term, so she could run and still have a seat in the upper chamber if she returns in defeat. Until she formally declares either way, it's unlikely that any of her peers will play Game of Thrones with the seeming heir-apparent to the nomination. Ther seems to be a log jam, with no one of political weight filing for anything until they know what the competition looks like.

So unless the Dems can find a more serious candidate than Kinky, it really could become Friedman versus Ryan in 2014.