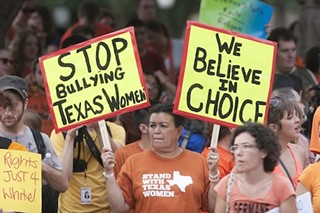 Hagstrom Miller was the last of five witnesses to testify in person during a two-day trial in federal court that challenges provisions of Texas' sweeping new abortion law set to take effect Oct. 29.

At issue in the lawsuit – brought by WWH, Planned Parenthood, and the ACLU, among others – is whether portions of the controversial House Bill 2, passed this summer violate constitutional due process and equal protection provisions and create an undue burden on women seeking legal abortion care. Specifically, the suit challenges a provision that would require all abortion doctors to obtain hospital admitting privileges within 30 miles of each clinic where they provide the procedure, and a mandate that doctors follow an older, FDA-approved protocol for administering medication abortion.

Even before HB 2 finally passed, during a special-called session of the Legislature this summer, Hagstrom Miller was working on finding new doctors that would be willing to work at her clinics, or to serve as backup doctors. She's been unsuccessful, she said, forcing her to fly doctors in to treat patients in search of care. But that's simply not feasible over the long run. As such, if the hospital admitting privileges provision goes into effect next week, she said she'll have to close three of her five clinics – in Fort Worth, McAllen, and San Antonio &ndsah because the doctors working there do not have local privileges, and to date none of the hospitals to which WWH doctors have applied for such privileges have actually responded to those applications (in some cases, WWH Vice President Andrea Ferrigno testified earlier today, the hospitals have not, despite repeated follow ups, responded to requests for an application.)

Indeed, Hagstrom Miller is down now to just 11 physicians, three of whom have privileges near a clinic – one in Beaumont and two in Austin, which will help to keep those clinics open, at least part time.

Are there "currently enough physicians in Texas capable and willing to provide abortion services if other factors didn't come into play?" asked Janet Crepps, attorney for the Center for Reproductive Rights, which is representing WWH in the suit.

Yes, Hagstrom Miller replied, but she's found that doctors are reluctant, at best, to work in a state harassing of and hostile to legal abortion care, she testified. Some doctors have told her they would lose privileges at religious-based hospitals if they were to work for her, or that they have contracts that prohibit "moonlighting" by providing abortions, she said. And then there are those who are simply afraid of the "targeting" by anti-choice protesters who are a regular fixture outside her clinics.

In all, 13 abortion clinics – including her three – across the state will, next Tuesday, lack doctors with admitting privileges, and will thus be out of business, she testified.

On cross examination, Arthur D'Andrea, a state assistant solicitor general, asked a series of confounding questions about the economics of her clinics (while trying to sound empathetic, but opting for a poor choice of words to do so, he said, "I'm not accusing you of making a killing"), the point of which seemed to be the if the clinics in jeopardy of closing did an "economic assessment" of their operations they would discover they have plenty of money to continue operations.

Still D'Andrea suggested that maybe the problem was simply that she isn't "meeting market" in her attempts to recruit doctors. "People still respond to incentives, right?" he asked.

Hagstrom Miller testified that she has offered a generous package to physicians – and was able recently to recruit one from out-of-state whose experience in gynecological surgeries and eligibility for board certification would likely mean she could obtain hospital-admitting privileges in McAllen, where she would have been stationed. But after HB 2 passed, the woman turned down the job. "She took a job for less money in New York City," she told D'Andrea, "because it was less scary to her than working in McAllen."

Indeed, Hagstrom Miller said that the harassment by abortion foes at her clinics in Fort Worth and McAllen is more "aggressive" than at the other locations, and that she's had a hard time recruiting in both places because there's more hostility to abortion services in those cities.

Lawyers present their closing arguments in the case tomorrow morning, Wednesday, Oct. 23, starting at 10 am.

EARLIER: Andrea Ferrigno, vice president of Whole Woman's Health, choked up while on the stand in federal court this morning, talking about how women in the Rio Grande Valley will be left without access to safe, legal abortion services if provisions of Texas' new sweeping abortion regulations law takes effect, as planned, Oct. 29.

"I'm very concerned in general, but the tears come because of McAllen," where she lived for 13 years, she said during the second day of a two-day trial to decide whether two of four provisions contained in the controversial House Bill 2, passed this summer during a third-called special session. At issue in the current lawsuit – brought by WWH, Planned Parenthood, and the ACLU, among others – is a provision that requires all abortion doctors to have hospital admitting privileges within 30 miles of each clinic where they perform the procedure, and a mandate that doctors comply with an older Food and Drug Administration-approved protocol for administering pharmaceutical abortion instead of a new, "evidence-based" protocol commonly used by doctors.

The providers have sued, arguing that the provisions violate Constitutional Due Process and Equal Protection clauses, creating an undue burden on women seeking access to legal abortion care. According to testimony from UT demographer, professor Joe Potter, who works on the Texas Policy Evaluation Project, which is analyzing the impact of restrictions on abortion care and access to family planning on Texas women, if the provisions take effect as planned next week, 10 abortion clinics will close right away, leaving more than 22,000 women in need of care without access to it.

The state has countered that the provisions are not only designed to protect the health and safety of women seeking abortion, but also to protect "fetal life." How admitting privileges or a drug protocol advances that goal is unclear, but Jonathan Mitchell(one of 10 male lawyers on the state's 11-lawyer team), solicitor general, told Judge Lee Yeakel in his opening remarks that the state doesn't have to prove these provisions are medically necessary, and under U.S. Supreme Court precedent the state has a right to impose reasonable restrictions in order to protect a state interest – in this case, restrictions that might encourage women not to seek abortion.

WWH is likely to close at least its McAllen clinic precisely because of the hospital admitting privileges provision of the new law, Ferrigno testified.

Even before HB 2 was finally passed this summer, Ferrigno in June began the research needed to attempt to secure privileges for each of the doctors working at the company's five Texas locations – in Austin, Beaumont, Fort Worth, McAllen, and San Antonio. And so far, she hasn't been able to secure privileges for any of the 11 doctors who work among those five clinics (three of the 11 – two doctors in Austin and one in Beaumont – already have privileges near two of the clinics.) It isn't for a lack of looking: she's contacted 32 hospitals within the 30-mile zone around each clinic; she's helped doctors to apply for privileges at 15 of those, but she hasn't gotten any word yet on whether any of them will be accepted. In some cases, she hasn't even heard back from the hospitals about exactly what process is required to make an application.

The obstacles to obtaining privileges for WWH doctors vary because it is up to the individual hospitals to create their own credentialing and privileges processes, Ferrigno testified.

Metropolitan Methodist in San Antonio requires doctors to live within a "reasonable distance" from the hospital so that they can provide "ongoing" care to admitted patients; WWH doctors that work at the San Antonio clinics live in Houston, Austin, and Providence, RI, In Fort Worth, the JPS Health Network requires obstetricians and gynecologists to have delivered 50 babies, including at least 5 by caesarean section, within the last 12 months, and to have performed at least 25 gynecological surgical procedures, including 5 "major abdominal surgeries" over the last 12 months. And in McAllen, South Texas Health Systems, requires board certification of physicians for privileges. WWH's McAllen doctor has had privileges at several hospitals in the past, before the board certification requirement was imposed; now mostly retired, he is isn't any longer eligible.

As a result, unless something happens to stop the law, the McAllen clinic – potentially along with additional WWH clinics – will shutter their operations. And that will leave women in the Valley without any nearby access. "We're doing everything we can for the McAllen clinic to stay open," she said. But since there are only two providers, including WWH in the area, and because the other clinic has already announced it will be shuttering operations as a result of the new law, if the WWH clinic closes, "there will be no access to safe, legal services in the entire Rio Grande Valley."

During cross examination Philip Lionberger, with the attorney general's office, asked whether Ferrigno had followed up with any of the institutions that have yet to respond to her inquiries about applying for privileges. Yes, "we call and call and call," and still no word, she replied.

But just because WWH hasn't yet heard anything doesn't mean they won't soon, Lionberger noted.

"Of the 15 applications, you haven't received any denials yet, have you?" he asked.

"So you have no idea if you'll be accepted or denied, as you sit here today," he followed up.

(Under Texas law, hospitals have a total of 170 days to decide whether to grant an application for privileges.)