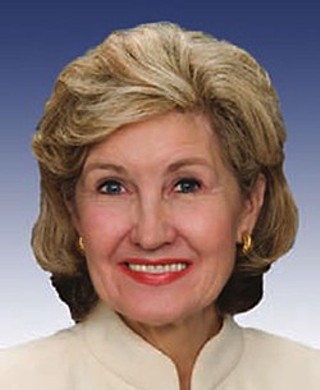 Kay Bailey Hutchison goes against the grain, Greg Abbott goes fishing, and Jerry Patterson shows his guns. Publicity is on the News Ticker.

• After much hullabaloo, a series of increasingly dire headlines, and one delightfully public meltdown, the federal government is open again. While most of us are celebrating the fact that we narrowly avoided the asteroid of doom, the entire Texas House and Senate delegations wish things would have happened differently.

• The feud between Sen. John McCain and congressional Chupa Chup Louie Gohmert is getting personal.

• Atty. Gen. Greg Abbott is cashing in on the feel-good spirit of the West tragedy in his new campaign ad.

• While not posting "Never Forget" gifs on Tumblr, Abbott sometimes trolls online dating sites. Thank goodness, we have him protecting our privacy.

• Like Twilight fans are drawn to puff paint, the candidates for lieutenant governor are drawn to extremism. Current Lite Guv David Dewhurst and Sen. Dan Patrick still want to party like it's 1899.

• Dew amped things up with his new "Hold Obama Accountable!" petition. See how Obama is staring disdainfully at all those bluebonnets? He's probably going after our barbecue next.

• Land Commissioner Jerry Patterson, however, doesn't go for all that nonsense. That's why he will be among the crowd waving guns at the Alamo.

• Rep. Brandon Creighton has exited the agriculture commissioner race as former Rep. Sid Miller has stepped in. We're sure they each have their own agenda, but we are able to more accurately differentiate the Olson twins.

• Texas State Board of Education chair Barbara Cargill's has lost her battle to inject more burning bushes into science textbooks. Thankfully, she now has enough unpublished fiction to start her on publishing house.

• In local news, UT' women's basketball coach Karen Aston has received a commitment from the as yet unborn daughter of Midland's Larry and Taylor Bullock.

• The Texas Department of Transportation says that the top 25 toll jumpers in Texas are all from the Austin area. Finally a trend list the whole city can be proud of.

• Anthony Graves, wrongly imprisoned for 18 years, has established a scholarship in the name of Nicole Cásarez, the attorney who fought for his release.