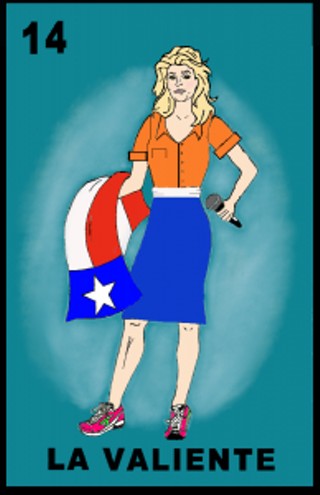 Wendy Davis wins the lottery, Greg Abbott shakes things up, and Ted Cruz gets his just desserts. Sweet nothings are on the News Ticker.

• After reading countless articles mindlessly repeating the slogans "Keep Austin Weird" and "Live Music Capital of the World," we are now convinced that Austin now only functions as a very large souvenir shop.

• Creepy first date auctioneer WhatsYourPrice.com has ranked Austin as the most risky city for sex in America. We can see why. Despite all the precautions smart Austinites take, there is still a chance of being bamboozled into a blind date with Alex Jones.

• Since the Texas Democratic Party has created Sen. Wendy Davis "La Valiente" lotería cards, it seems only fair that opponent Atty. Gen. Greg Abbott would be given the same courtesy.

• The main question raised by the tattooed Jesus billboards dotting the Lubbock landscape is why couldn't they find a Jesus that could grow his own beard. We know it's called spirit gum, but they do know that it isn't actually holy, right?

• Tom Pauken warns gubernatorial opponent Greg Abbott that he shouldn't play it safe on the campaign trail lest Davis snatches the spotlight. We agree, Abbott should throw caution to the wind. Hire Judas Priest to write an Abbott anthem, bring out the taco cannon, dance with the stars. It's all about you, Greg.

• Texas' Democratic congressional delegation is reportedly seeking a meeting with Sens. Ted Cruz and John Cornyn. Their ruse is leave a trail of delicious tortes all over Washington. Republicans can't resist torte reform.

• Maybe it's just us, but Cruz seems a little worse for wear since this whole shutdownapalooza started. It's as if his features suddenly realized they had to share space with that never closed mouth, and have slowly started drifting downward for escape. A few more weeks of this and he'll be La Sagrada Família.

• Texas has dropped down two points in the Tax Foundation's State Business Tax Climate Index. That means the "Texas Miracle" is more like that time Criss Angel kept repeating "ta-da" under the influence of benzedrine.

• Carole Keeton, Maria Luisa, Harriet M. Murphy, and Janis Pinnelli are the 2013 inductees into the Austin Women's Hall of Fame.

• Harris County Judge Ed Emmett says that this week's removal of much of the Astrodome's exterior features represents an "improvement," not a "demolition." He later added that the new Kenny Rogers is vastly preferable to the old.

• The LBJ School of Public Affairs have released a report detailing ways to prevent any future government shutdowns. The report is 200 pages, which seems like a particularly elaborate way to say "lock Ted Cruz up in Azkaban."