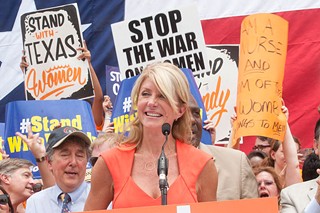 Wendy Davis is discussed, Rob Ford cracks up, and Michael Quinn Sullivan is nonplussed. Backlash is on the News Ticker.

• That dangling piece of carrion proved too fleshy for some jackals to resist. Texas Right to Life debuted a radio ad calling Davis an "abortion zealot."

• Meanwhile, the official Republican opposition magically settled on the theme that Davis is hell-bent on bringing California values to the Lone Star State. The Greg Abbott campaign conflated all this with Obamacare and "Bloomberg-style gun control." To be fair, they never were all that great at the home edition of Where in the World is Carmen Sandiego.

• The attorney general picked up the theme again in his latest campaign ad, which is one white person short of being a Robert Rauschenberg painting.

• In contrast, Texans for Fiscal Responsibility used scary, scary black for their website accusing Davis of all sorts of shenanigans.

• And the Republican Party of Texas hired Jigu! Thunder Drums of China to score their attack ad because drums remind people of the apocalypse. And nine out of ten Republicans think the apocalypse is real scary.

• Tom Pauken was a little more specific in his California Dreaming, pointing out Davis' "San Francisco-style Democratic views." Did you know she combines rice and the perfect mix of seasonings to create tasty side dishes and main dish recipes? You just can't get more San Francisco than that.

• Michael Quinn Sullivan was a little confused by Davis' announcement speech. But he has no doubt that she was quoting from Mao Zedong. That red shell she was wearing at the announcement tells you everything you need to know.

No idea what she means, but @WendyDavisTexas says "less lone and... more star" is her radicalized-liberal vision for Texas. #teaparty

• A wrench may be thrown in the gubernatorial race, but will all the poodles run to the house for the funky Deb Medina?

• Wendy's announcement might have some repercussions down ballot. Sen. Leticia Van de Putte is reportedly still considering a run for lieutenant governor.

• In other election news, Tommy Williams is giving up his Senate seat to chew cud or tip cows or whatever it is that Aggies do.

• Dan Flynn will be seeking reelection. Judging by his campaign site glamor shot, however, he will henceforth be known as Cotton Hill.

• The Texas Department of Transportation (TxDOT if you're nasty) is getting tough with serial toll violators.

• Yesterday Toronto Mayor Rob Ford visited with Austin Mayor Lee Leffingwell to discuss the new Music City Alliance. We are sure they are going to make a crack team.

• Hey kids! You know what's more fun than listening to all the cool, hip bands at ACL this weekend? Talking about lower taxation with the righteous dudes over at FreedomWorks. You know, kicking around the hacky sack, listening to a little Michael W. Smith, talking about all the sexy parts of Ayn Rand novels.