Wendy Davis: In For Governor Race

UPDATE: Fort Worth Dem to challenge GOP stranglehold next November 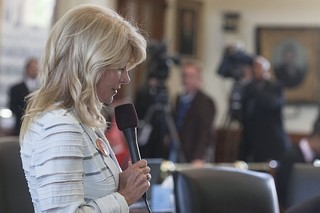 Sen. Wendy Davis, D-Fort Worth, during the women's health debate filibuster that made her a national figure, and now propels her into the race to be governor (Photo by Jana Birchum)

In a move surprising no one, this afternoon Sen. Wendy Davis, D-Fort Worth, announced that she will be running for governor in the 2014 Democratic primaries.

Davis made her announcement at the Wylie G. Thomas Coliseum in Haltom City, just outside of Fort Worth (Actually, the cat was out of the bag a few minutes earlier: her campaign uncovered the "Wendy for Governor" banner just before she took the stage, then informed the press via email just before her formal announcement.) It was a location loaded with resonance, as that's where she graduated from high school. In a preview of her speech, Davis said, "We love Texas not only for how good it is, but for how great we know it can be. With the right kind of leadership, the great state of Texas will keep its sacred promise that where you start has nothing to do with how far you can go."

Her announcement came after a hellraising invocation by Tarrant County Commissioner Roy Brooks, in which he called Davis a gift from God. "We ask you, Lord, to change her pink running shoes into combat boots … so she can do battle against the negative forces that rule this state."

Taking the stage to Alicia Keyes' "Girl on Fire", Davis talked about Texas as a state where people take risks, from wildcatters to the tech industry. That'll probably be the underlying subtext to her campaign, because a Democrat running for statewide office has been an outside chance for the last decade and a half. However, Davis doubled down on her suggestion that a longshot is what is needed. "Texas is more than a state," she said. "Texas has always been a promise."

Davis also used the gathering to launch her campaign's new rallying cry: "We will keep going." In short, she told her supporters, it's not just about getting to election day. Instead, it's about redesigning Texas politics. Taking a jibe at her GOP opponents (without naming them) she promised an end to quid pro quo politics "so it's a lot less Lone and a lot more Star."

The Tarrant County Democrat is only in her second term in the Texas legislature, but has already had a meteoric rise to prominence. A nine year veteran of the Fort Worth City Council, she was elected to the State Senate in 2008, defeating local GOP institution Kim Brimer in a dramatic upset. She started making real headlines in 2011, when she undertook a filibuster of Republican plans to cut billions from public education. Even then, the GOP was clearly worried about her political ascendency (see "Who is Wendy Davis (and why is the Legislative GOP so afraid of her)?, June 6, 2011.) Davis referred to that directly in her speech, saying that Texas deserves a leader who understands that good educational opportunities are essential for a good economy.

There was serious discussion back then of whether she might consider a run for governor, but those were kiboshed earlier this year when senators went through the term limit lottery. Every time Senate districts are redrawn, to ensure that terms are staggered, senators pull envelopes out of a bag to see who gets a four year term and who only gets two. Davis pulled out the double snake eyes, seemingly blowing out the fuse on her shot (after all, no-one in the Senate wants to run if they don't have a seat to come back to.)

However, her filibuster of the abortion bill during the 2013 special session re-ignited those fires of speculation. In fact, Davis had been expected to make an announcement closer to Labor Day, but pushed that back due to the ill health of her father Jerry Russell, who sadly died on September 5.

This last step leaves two significant questions: Who will the Democrats field to fill out the rest of the ticket, and who will run to replace Davis in her Senate seat?

Davis becomes the automatic front runner (in fact, only confirmed Democratic candidate) for her party's nomination. On the GOP side, the race is between Attorney General Greg Abbott and former Texas Workforce Commission chair Tom Pauken.

Anticipating her announcement, Pauken welcomed her into the race through an embargoed statement issued just before noon. Contrasting "Ms. Davis’ San Francisco-style Democratic views" with his own traditionalist conservative views, Pauken said, "she is very intelligent and will be a formidable candidate in this race to determine who will be the next governor of the state of Texas."

That stands in stark contrast to Abbott, whose statements on Davis seem mainly to have involved retweeting statements calling her "Abortion Barbie" and "too stupid" to run for governor.

However, Abbott doesn't need to get his hands dirty this time, when he has right wing corporate sock puppet Texans for Fiscal Responsibility to do the job for him. In a statement again issued before Davis' speech, executive director Michael Quinn Sullivan ("Mucus" to his friends) said, "Wendy Davis wants to turn Texas blue by way of a sea of red-ink and a flood of high taxes."

In the opening to her speech, Davis stayed clear of any mention of her abortion rights filibuster, leading instead with the education discussion. However, in a statement, NARAL Pro-Choice America President Ilyse Hogue said, "[Davis] has awakened people up to the battle for reproductive freedom raging around the country. She reminded us of the power of one woman willing to stand for the health and freedom of Texans when those American values desperately need champions."

Now Davis has to launch into the actual hard work of a campaign. She may still face a challenger, and she has a long way to go to match the $25 million warchest Abbott's campaign has assembled.

However, she may have some room for optimism in the most recent polling. According to a Texas Lyceum poll, taken Sept. 6-20, she only trails Abbott in a head-to-head race 21% to 29%. That means 50% of Texas voters are classified as "don't know," and that's a powerful and flexible number. Significantly, Davis leads Abbott in Hispanic voters polled 22% to 18%, meaning that 60% of the state's biggest untapped electoral demographic is still up for grabs, and she already has a minor lead.

Of course, this hasn't stopped the talk of Abbott as the presumptive next tenant of the governor's mansion (controversially, Texas Monthly recently ran a cover story calling him "The Gov.") But then again, Davis was supposed to be a dead duck in the 2012 elections after her education filibuster, and that never happened.

However, Davis' chances aren't the only issue at stake. Her name at the top of the ballot is considered by Democratic campaign activists to be a boost all the way down, simply because she will raise awareness of other candidates and add a boost to baseline turnout. One campaign activist last week told me that Davis's presence increases the number of House seats that they can consider in play.