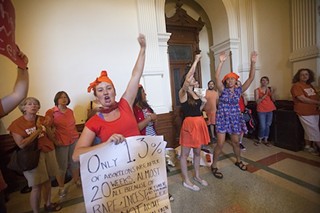 A federal lawsuit filed against the state of Texas this morning by reproductive rights advocates on behalf of abortion providers across the state challenges two significant provisions of House Bill 2, the controversial omnibus anti-abortion law, enacted this summer during a second special-called legislative session.

The lawsuit was filed against Attorney General Greg Abbott and a host of county criminal district attorneys by the Center for Reproductive Rights, Planned Parenthood Federation of America, the American Civil Liberties Union, and the ACLU of Texas, on behalf of more than a dozen providers of women's health and abortion services – including Amy Hagstrom Miller's Whole Woman's Health and Planned Parenthood of Greater Texas, both of which operate clinics in Austin  – and several named physicians who argue that two of four provisions in HB 2 place an unconstitutional undue burden on women seeking access to legally-protected abortion care.

HB 2 contained four provisions that, taken together and passed into law this summer, create new and sweeping restrictions to abortion access. The law enacts a ban on all abortion after 20 weeks; a requirement that abortion-providers transform their clinics to meet the state's operating requirements for “ambulatory surgical centers” (expensive and complicated physical spaces that are meant for actual surgeries); a requirement that all abortion-providing doctors obtain hospital admitting privileges within 30 miles of each clinic where they perform abortions; and a mandate that any clinics that provide medication (i.e., pharmaceutical) abortion do so in compliance with a more than decade-old protocol that many women's health providers say is outdated.

The lawsuit (Planned Parenthood, et al. v. Abbott) challenges the second two restrictions, requiring admitting privileges (lest a doctor lose his license) and requiring that medication abortion be provided in a state-directed manner.

A challenge to the 20-week ban will likely come later, as would a challenge to the physical plant requirements – that specific issue is not yet ripe for challenge since the state has not yet adopted any new regulations that would guide the oversight of these new abortion facilities. Those regulations are expected to be adopted in early 2014; the law gives providers until September 1 to comply with the new rules. (Expect a lawsuit on that front sometime next spring or early summer.)

Both the admitting-privileges and the medication abortion restrictions are set to take effect Oct. 29. In addition to battling the overall unconstitutionality of the provisions, the groups early next week will file additional paperwork asking that the effective date be blocked.

At issue, in part, is that the state has not left doctors trying to comply with the admitting privileges portion of the law enough time to do so. Individual hospitals govern their admitting privilege processes – meaning each has different requirements and there are various and individual timelines for those privileges to be granted, depending on which facility a doctor is applying to – within an ultimate, state-mandated deadline that applications for privileges be decided within a 170-day time period. Thus, even if a forward-thinking clinic-based doctor had thought to start the process back in June – when the bill was still in limbo after Fort Worth Dem Sen. Wendy Davis' historic filibuster quashed its first consideration – there would still be a good chance the doctor would not have privileges in time to meet the Oct. 29 deadline. And given that doctors who work in multiple clinics across the state would have to meet the requirements of and apply to multiple hospitals for privileges, and then be accepted, before Oct. 29 makes it nearly impossible for many abortion-performing doctors to comply with the law. Under the new law, doctors who don't comply with this provision could lose their medical licenses and face criminal prosecution. "If allowed to take effect on October 29, the admitting privileges requirement will force over one-third of the state's approximately thirty-six licensed facilities where abortions are performed to stop providing those services," reads the lawsuit, "thereby dramatically reducing abortion access throughout the state."

Indeed, the complexity of the admitting-privilege process is among the points raised by the Texas Hospital Association in committee testimony opposing this provision of the bill. Regardless of deadline, according to the THA it would be difficult, at best, for many abortion-performing doctors to obtain privileges. Privileges are meant as a way for hospitals to ensure that doctors performing procedures within their four walls are qualified to do so; because abortion is only rarely performed in a hospital setting, it is unlikely a hospital would feel compelled to grant privileges.

According to the lawsuit, women in at least six metropolitan regions of the state – Fort Worth, Killeen, Waco, McAllen, Harlingen, and Lubbock – would be left without any access to abortion care if the provision takes effect Oct. 29.

In sum, the admitting-privilege portion of the law violates due process protections while also placing an undue burden on women seeking care, reads the lawsuit. Notably, hospital admitting-privilege requirements have been enacted, and subsequently blocked, in Mississippi, Alabama, Wisconsin, and North Dakota.

The medication abortion provisions of the lawsuit would also create a great and undue burden on women, the lawsuit argues, by allowing the state, and not doctors, to decide how the abortion-inducing medicines should be administered. Under the new law, medication abortions would have to be administered within the first 49 days of pregnancy, and it would require that women present at a clinic for in-person administration of each of two rounds of drugs that induce termination. Because Texas already requires a 24-hour waiting period and an extra trip to the abortionist for a mandatory ultrasound procedure prior to termination, women seeking pharmaceutical abortion would now be required to visit a clinic four times to receive that abortion. Moreover, advocates say that the 49-day window is simply too narrow for women to avail themselves of this non-invasive alternative because many do not know for at least a month or more – after a missed menstrual cycle – whether or not they are, in fact, pregnant.

Proponents of the measure say that it is simply meant to ensure that pharmaceutical abortions are administered in accordance with a federal Food and Drug Administration-approved guideline, developed more than a decade ago when the drug was first introduced. Ensuring doctors comply with labeling instructions for the drug ensures that women are protected, lawmakers (including, strongly, Sen. Dan Patrick, R-Houston, who is running for lieutenant governor in 2014 and who sponsored the medication abortion restriction as a stand-alone measure during the 2013, and previous, session) and anti-abortion advocates have repeatedly argued.

But that protocol was simply an initial labeling requirement and not meant to hamstring doctors from administering the drug in a medically and scientifically responsible way, argues the lawsuit. Indeed, the "evidence-based" regimens followed by the plaintiff providers have "been shown to be more effective" than the drug label protocol, reads the lawsuit, "both having a lower rate of ongoing pregnancies and requiring fewer surgical interventions to complete the procedure."

To say that all medicines must only be used in accordance with on-label directions would be to forbid evolved and common uses for many drugs – including prescribing aspirin to protect against heart attack.

Abortion-rights advocates, including Hagstrom Miller, say that the regulations imposed on pharmaceutical abortion are preposterous, since early pharmaceutical abortions, before there is any real fetal development, are often better for women – and would seemingly comport with conservative anti-reproductive choice advocates who are concerned about the alleged effects of abortion on the unborn. "I think it is important to acknowledge that abortion is really complicated – complex, morally and ethically, in our society," she told us this summer. "But medically speaking, it is both safe and simple."

In sum, reads the lawsuit, the "challenged provisions of Texas House Bill No. 2 – the admitting privileges requirement and the medication abortion restrictions – violate Plaintiffs' patients' right to liberty and privacy as guaranteed [by the Constitution] standing alone, together, and in conjunction with burdens imposed by existing Texas law, because they are medically unwarranted health regulations and they impose an undue burden on women seeking abortions."

"I grew up in Texas and learned early on that women only got what they fought for," Cecile Richards, president of Planned Parenthood Federation of America said during a morning press call. This lawsuit is just "the latest chapter in what is going to be a long fight to restore [access to] women's health to women who need it most," she said. "Texas women deserve better."