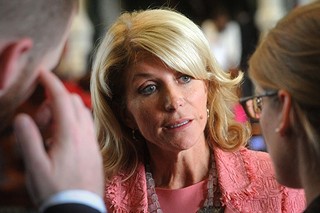 Sometimes an announcement of an announcement can feel like more of an occasion than the actual announcement itself. That's what happened yesterday when Sen. Wendy Davis announced via email that she would be declaring the next step of her career on Oct. 3.

Within minutes, Twitter erupted with idle speculation. Certainly, everything pointed towards a gubernatorial bid. A splashy landing page teased supporters with the opportunity to get first dibs on the knowledge. Texas Democratic surrogates renewed attacks on presumed heir to the throne Greg Abbott. It all played out with an air of inevitability.

Or perhaps wishful thinking. Davis is one of the few Texas Democrats with statewide name recognition. Without her, the Democrats would be left without star power. Indeed, some potential down-ballot candidates are waiting for a Davis announcement before throwing their hat in the ring. Most notably, Sen. Leticia Van de Putte told the San Antonio Express-News that she would not be running for lieutenant governor without Wendy on the ballot.

But ballyhoo aside, there is a still a chance that Davis will be announcing that she is becoming the newest cast member of Orange is the New Black instead. It might be best for Dems to have a back-up plan. Luckily, we have a few ideas.

• Respectfully ask Davis to reconsider via an increasingly elaborate parade of Edible Arrangements.

• Build a facsimile of Texas in the Mojave Desert. Tell Abbott that Texas just wanted a change of scenery.

• Follow Davis around with the governor's desk chair. Isn't it comfortable, Wendy? Isn't the leather supple? Don't you want to sit in it every day?

• Hire the ghost of Johnnie Cochran to haunt her house, eerily moaning that she should change her mind. This may require a seance, unless we missed something in the iOS7 update.

• If budget is a concern, bribe your 4-year-old nephew to follow her around and repeat "run Wendy" on loop. This will probably be more effective if you let the kid watch some Gilbert Gottfried movies first.

• Crawl around on the Senate chamber floor until you find a lock of Davis' hair. Use the DNA to create a clone named Mindy Davis. Admittedly this is creepy, but desperate times…

• Run a cardboard cut-out of Davis instead. It would still be more compelling than Tom Pauken.

• Tell Davis she is competing on Dancing With the Stars. When the finale happens, reveal to her that all the votes were actually for governor. Surprise!