The men behind the "too stupid to be governor" Tweet

Republican gubernatorial hopeful Attorney General Greg Abbott is taking flack today after one of his most powerful campaign hatchet men Tweeted that Sen. Wendy Davis, D-Fort Worth, is "too stupid to be governor."

Insults aside, it's an interesting opportunity to see who is lining up in Abbott's corner. Seemingly, far from being the fresh new broom that he implies, post-

It all began yesterday, when Abbott campaign consigliere Dave Carney retweeted this gem from Austin-based right wing blogger Robbie Cooper, a link to an anti-gun control article called "Total Recall in CO (and why Wendy Davis is too Stupid to be Governor)" 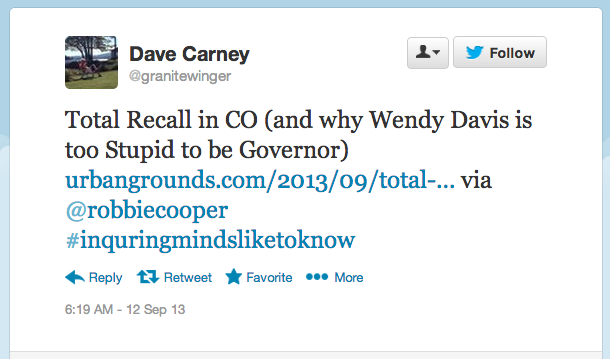 Many people were particularly struck by the hashtag "#inquringmindsliketoknow," and there's been a lot of social media about stupid is as stupid does. But that's a line of inqury down which we would rather not go.

Carney may be a familiar name. In fact, he's basically a landmark in Texas' long trail to electoral dysfunction and GOP pandering to the super-right. Moreover, he has been Perry's right hand campaign man for years, including the infamous face plant that was Perry's 2012 run for president, as well as Lt. Gov. David Dewhurst's abortive US Senate shot. (He was also connected to an oddball 2010 attempt to get the Green Party on the ballot, in an attempt to dilute and split liberal voters.)

But what about Cooper? Superficially, he's just one of the never-ending torrent of far right bloggers. His main claim to fame is alleging that it's really black people and Democrats who are the racists (including, but not limited to, Chris Rock, Samuel L. Jackson and the entire city of Baltimore.) And yet, somehow, this marginal figure got invited to the capitol press corp's Christmas Coffee with the Perry family at the mansion last December – an event to which the legitimate press like the Texas Observer was not invited.

The Texas Democratic Party has fired back at Carney, Brooks, Abbott et al. In a statement, said:

"It’s clear that Abbott’s advisers are following a strategy of offending every woman voter in the state of Texas. A woman who worked her way from a trailer park to graduate from Harvard Law School with honors is anything but stupid. Women throughout the state know what it’s like to have their intelligence ignored and made a joke. It’s never been a good idea to mess with Texas women. And come November 2014, the women of Texas will make clear that the joke’s actually on Republicans who find it okay to reference such a hard working and smart woman as stupid."

More importantly, Abbott should probably just steer clear of Twitter all together when it comes to Davis. Just last month, he thanked someone for calling Davis a "retard." Maybe Friendster is more his speed.