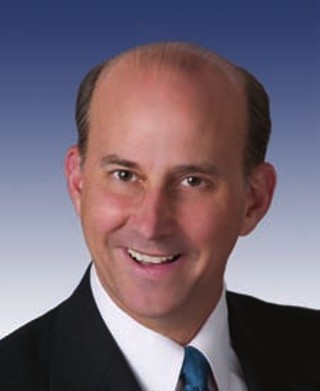 Pete Sessions deals with a challenge, Louie Gohmert walks like an Egyptian, and Lance Armstrong says goodbye to a friend. Difficulties are on the News Ticker.

• Gov. Rick Perry is making all sorts of new friends with his national job-poaching tour. Maryland Gov. Martin O'Malley wants to give his "high hat the high hand." Sounds sweet.

• And Maryland House Speaker Michael E. Busch even offered him affordable education. Perry is going to love shopping for back to school fashions!

• We are not linking to The Weekly Standard's effusive take on Sen. Ted Cruz because they offer anything particularly interesting to say about Cruzmania, but because of the absurdly large art. This is what Heidi sees when she leans in for a kiss, ya'll. Everyone needs a good scare on Friday the 13th.

• Timothy Timmerman, a 19th century chimney sweep who pulled himself up by the bootstraps to become chair of the Lower Colorado River Authority, says the agency has abandoned all consideration of lowering Lake Austin water levels.

• Somehow we missed this earlier in the week, but Reps. Louie Gohmert, Michele Bachmann, and Steve King have apparently formed a traveling Peter, Paul and Mary cover band. Now we know why the folk trio always wanted to have a hammer.

• Man, those Staples singers are becoming less soulful with each successive generation.

• Empower Texans honcho Michael Quinn Sullivan devoted his Twitter quote happy hour this morning to Mahatma Gandhi. Honestly, we can see how he would draw the spiritual connection. While one supported the rights of workers and the lowest castes, the other supports candidates who are broadening income inequality. The could have subbed for the Olsen twins on Full House.

• Whole Foods 365 Natural Pines Pellet Cat Litter reportedly contains pesticides that are not approved for sale in California. Apparently, the "pines" in the name is the intransitive verb and not the fragrant noun.

• Sure, there are some similarities between Lt. Gov. David Dewhurst and U.T. football coach Mack Brown. But we still think Dew has the better quarterback.

• Local drug user Lance Armstrong announced via Twitter that he has returned his bronze medal to the Olympic committee.