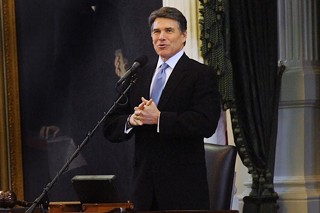 Ted Cruz blubbers on, Mike Villarreal declines an invitation, and Annise Parker jumps off a cliff. Twitter wars are on the News Ticker.

• Every person in Texas is either retiring from politics, thinking of entering politics, or already a politician.

• Atty. Gen. Greg Abbott's chief advisor Dave Carney took a Twitter swipe at Sen. Wendy Davis, spreading Alex Jones cosplayer Robbie Cooper's misogynistic meme calling Sen. Wendy Davis "too stupid to be Gov." Charmingly, he ended the tweet with the hashtag #inquringmindsliketoknow. We reached out to him for a comment, but he said he wasn't taking "inquries."

• The Dallas Morning News is asking whether Davis or U.S. Sen. Ted Cruz should be the newspaper's Texan of the Year. Reassuringly, write-in candidate FARTS currently has twice as many votes as former Rep. Ron Paul.

• Speaking of Cruz, he would not shut up about jowly old racists at a recent Heritage Foundation event, saying that the U.S. Senate needed "a hundred more like Jesse Helms." To be fair, that could be useful. The Helms army would then form a giant Jessius Prime and finally end all the Michael Bay nonsense.

• At the same event, the ever jocular senator chuckled about President Obama being called a hawk while he was being called a dove, sadly missing a chance to make a Freaky Friday reference.

• Houston Mayor Annise Parker wants her own city to pass a nondiscrimination ordinance. Everyone is doing it. Gawd, get with the times, mom.

• Handsome state Rep. Mike Villarreal explains that "the timing is not good" for him to be handsome on a statewide level.

• University of Texas scientist and state textbook reviewer Jimmy Gollihar confirms that State Board of Education Chair Barbara Cargill has some 'splaining to do.

• According to The Daily Beast, the hottest trend of 2013 isn't twerking, or shoddy journalism, or even pogs.

• Turns out, Texas Supreme Court Chief Justice appointee Nathan Hecht may have some problems with ethics. He is quite good, however, at modeling. Rumor is that he was the inspiration for America's Next Top Model's "gravitas" challenge.

• KEYE invites you to come and see a world of Vince Covino's imagination.