Andy Brown and the Bold-Faced Names The master of ceremonies at the George Washington Carver Museum event was County Attorney David Escamilla, who introduced a trio of prominent Democrats: philanthropist Ellen Richards, state Sen. Kirk Watson, and Austin Congressman Lloyd Doggett. Brown followed with thanks and his campaign theme of “Travis County values”: “When we all work together, we can accomplish great things.”

Richards spoke of meeting Brown during her mother Ann’s 1990 campaign for governor, where she first learned of his “progressive values that I share.” She praised his work “to bring everyone to the table,” to defend “the rights of women to make their own medical decisions,” to “provide access for everyone to quality public education.” She praised his “outstanding leadership” as Travis County Democratic Party chair, adding that she “trust[s] him absolutely to bring people together.”

Watson wryly described the Party chair position (one he once had himself) as “the hardest job in the world,” and praised Brown for “doing whatever it takes” to complete his assignments. “I’ve come to trust that when Andy tells you he’s going to do something,” said Watson, “it’s going to be done.” He added that he trusted Brown to perform well in the role of county judge, and to defend the environment, civil rights, women’s rights, and public education. “I could go on and on and on,” the senator joked in reference to the recent battles at the Legislature, “but I’m tired of filibusters.”

Doggett (who other than Brown received the loudest ovation of the evening) noted that Brown’s tenure as Party chair took place in “tough territory” - a blue Democratic island in a red Republican Texas sea – while adding that circumstances may slowly be changing in nearby counties. He thanked Brown for working on difficult Doggett campaigns – “full-time in McAllen” – when Doggett’s congressional district was gerrymandered from Austin down to the border town – and said Brown has been “working in the trenches” promoting “progressive values that we hold so dear.”

“I’ve known Andy, I think, going back to his high school days,” Doggett continued, “and I’ve come to admire him, respect him, and trust him and his commitment.”

Afterward, Brown campaign manager Jim Wick told NewsDesk that the event had raised $2,500 in cash and an estimated $2,000 in school supplies for the organization Austin Voices for Education and Youth.

That doesn’t exhaust the guest list – Escamilla listed a few more who couldn’t attend – and the couple of hundred people crammed into the lobby of the Carver Museum might well have constituted a convention quorum of the Travis County Democratic Party. Whether they reflect a potential county voting majority – with the March primary still months away – is yet to be demonstrated. Brown’s opponent, recently resigned-to-run Pct. 2 commissioner Sarah Eckhardt, is currently traveling in Europe with her family (scheduled to return this weekend), but her campaign manager Nick Hudson released a statement in anticipation of the event on her behalf: "Sarah Eckhardt looks forward to continuing her work with Senator Watson and Congressman Doggett when voters elect her Travis County Judge."

No one at Thursday’s gathering would speak an ill word of Eckhardt, and indeed several people in the crowd were careful to preface their support for Brown with praise for Eckhardt as a person and a commissioner, and every one NewsDesk spoke to said they expected a tough and close race for county judge. TFT’s Malfaro may have summed up the general sentiment when he said that Eckhardt has indeed been a good commissioner. But he continued, “There are only two ways to run a political campaign: unopposed or scared. Brown is running scared, and Eckhardt’s in Europe.” 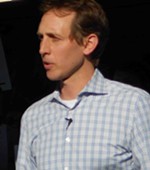