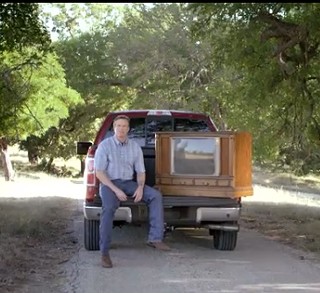 David Dewhurst focuses on the family, Harvey Hilderbran risks an audit, and Dan Patrick receives an education. Publicity is on the News Ticker.

• RunTex may have gone belly-up, but Austinites will be damned if ACL will be the only time that Zilker Park visitors are lit up.

• University of Texas students are organizing an action after a student of color was the victim of a bleach bomb.

• Lt. Gov. David Dewhurst defended his now infamous chat with the Allen police by asking, "How would you feel if you had two family members call and they were so distraught that they could barely talk?" Personally, we'd be a bit relieved, but Dew probably gets lonely.

• San Antonio Express-News Austin Bureau Chief Peggy Fikac's finger must throb, what with all that time spent on Texas' pulse.

• We're not entirely sure what is going on in Rep. Harvey Hilderbran's ludicrous anti-IRS ad, but we think his old console T.V. might have rabies.

• Over the weekend, Sen. Dan Patrick and State Board of Education vice chairman Thomas Ratliff debated whether CSCOPE was a useful tool for rural school districts or a portal through which Gozer the Gozerian will return to Texas, bringing unfathomable destruction and despair.

• Missouri Gov. Jay Nixon is probably canceling his annual governor friendship day with Rick Perry. We guess all that time Rick spent learning to make macaroons was for nothing. Boo!

• The Mesquite Rodeo wants to hire the world's most famous anti-Obama clown for this years event. But since Rep. Steve Stockman was previously engaged, they've gone with their second choice.

Miley Cyrus is a disgrace.