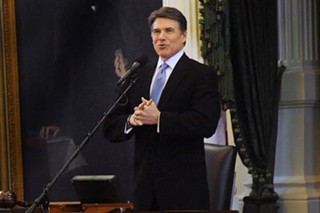 Gov. Perry leads lawmakers in a singalong of "My Humps" (by John Anderson)

• At a certain point, the Austin Police Department Public Information Office might want to draft a form letter for those stressful times when the Texas Civil Rights Project is suing them for an officer-involved shooting.

• True to form, Gov. Rick Perry has appointed former Chief of Staff Brandy Marty to the Public Utility Commission. Unfortunately, that also means he is running out of cronies to fill key positions, having already promised gubernatorial pooch Rory the Travis County D.A. seat should Rosemary Lehmberg choose to resign.

• Texas ACT scores are finally lining up with the national average. And to think, you were fretting that she would never get into a good school.

• The governor's office is denying that it will make a deal to get funds under the Affordable Care Act. In fact, Perry is so vehement in his opposition to Obamacare that he will not allow anything with the suffix "ama" into the Governor's Mansion. For Anita, it has been a cruel summer indeed.

• Frankly, we're a little tired of the pun parade appearing in stories about the Texas Department of Criminal Justice/ swine air conditioning controversy. Some journalists are such boars.

• The Midland Planned Parenthood clinic is latest casualty of the anti-abortion legislation.

• The winner of Atty. Gen. Greg Abbott's anti-Obamacare video contest will be treated to a behind-the-scenes tour of his gubernatorial campaign. We have been told our Die Hard homage featuring Tony Danza and former professional wrestler Chyna won't make the cut. Pity, Chyna made a terrific Kathleen Sebelius.

• In further Abbott news, a Indiana University study may be a harbinger of trouble for his gubernatorial campaign. The research found that 93% of elected U.S. congressional candidates also had the most mentions on Twitter. Maybe it's time he told his supporters that they should all stop talking about Sen. Wendy Davis.

• TXDot has already started converting some paved roads to gravel, prompting several local politicians to wonder what ass is at fault.

• A note to Austin Business Journal Contributing Editor Sarah Drake, whose "reporting" on the purchase of the former Nuevo Leon lot includes turns of phrase eerily similar to a helpfully linked blog post from our own Amy Smith: We know there is always pressure for fast turnaround times on stories, but if you wanted to operate a jigsaw, you might want to consider a job at Home Depot.

• According to the folks behind the definitely not for gold diggers dating site SeekingMillionaires.com, Austin has the most new members seeking a "Real Housewives" experience. Who would have thunk that so many Austin women wanted to go to prison?