Greg Abbott and the Fail Whale

Social media 101: Do not supportively respond to anything that uses the word "retard." Apparently, Attorney General Greg Abbott's media team did not get that message.

There's a lot of smart money riding on 2014 seeing a gubernatorial race between Abbott and Sen. Wendy Davis, D-Forth Worth – smart money, and dumb rhetoric. Enter Jeff Rutledge, a Denton-based attorney who describes himself on his Twitter feed as "Glock 19 owner/concealed carrier; pro-life Catholic." He should probably add right wing troll to the list.

On Saturday, Rutledge was joining in the far right ramblings about Davis or, as the Tea Party has dubbed her, Abortion Barbie. But that wasn't good enough for Rutledge. He decided to up the ante with a fresh new insult: One that Abbott decided to celebrate: 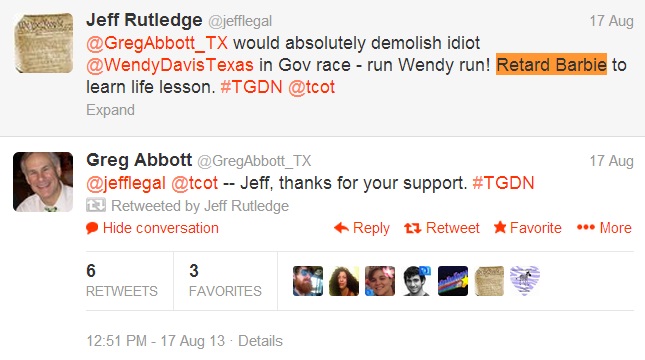 The next day, realizing that he'd just given a big thumb's up to someone who throws the word retard around, Abbott (or whoever it is that runs his social media operation) did a quasi-back pedal:

Yet that may be too little and far too late. After all, Abbott's campaign has quietly tried to play up the idea that he is "speaking up for (the) disabled". However, disability rights groups have less truck with Abbott ever since he challenged the Americans With Disabilities Act in 2003.

Obviously, Democrats weren't going to let Abbott's latest Twitter fail. In a statement, Democratic Party of Texas executive director Gilberto Hinojosa wrote, "Greg Abbott stated appreciation for a tweet that insults women and the mentally disabled, and now doesn’t even have the decency to apologize? Hate and discrimination have no place in our public discourse." Demanding a full apology to the people of Texas, Hinojosa continues, "This offensive behavior is the opposite of "positive," and is exactly why Texans deserve someone better than Abbott as our next governor."

Rutledge, however, has doubled down, calling the whole thing a non-story, dubbing liberals "horse's asses" and claiming that real journalism is dead because reporters contacted him for comment (don't worry: he also emerged from under his bridge long enough to claim that 90% of poor people are "lazy and stupid … addicts and alcoholics.") He's also been spending a lot of time retweeting comments by Todd Kincannon, former South Carolina GOP executive director, about "mongoloids." Kincannon, you might remember, gained brief infamy for calling Trayvon Martin "a dangerous thug who needed to be put down like a rabid dog." (Almost as stunning as when he told an anti-war veteran "Shame you didn’t come home in a body bag.")