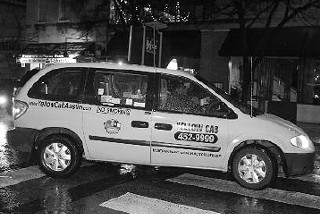 After the unexpected death of one of their own, the Taxi Drivers Association of Austin (TDAA) is hoping that Austin city officials will take a closer look at what they say is an inequitable system.

Abu Loiu, a TDAA member, passed away August 15th while idling in the staging area of Austin-Bergstrom International Airport. Liou, like other Austin taxi drivers, was classified as an independent contractor. According to the 2010 TDAA report "Driving Austin, Driving Injustice," that practice favors the city's three taxi franchises at the expense of the drivers.

The study notes that many Austin's cabbies must pay Social Security and Medicaid taxes out-of-pocket, along with lease and terminal fees. According to the study, the terminal fees have risen sharply in the past thirty years – today, they are over $200 per week. After various expenses are paid, the study estimates taxi drivers take home around $200 a week, working an average of 12 hours a day with few days off. In many cases, the study concludes, that places hourly earnings well below minimum wage. Regardless of customer traffic, franchise holders are assured profits through taxi lease payments and the terminal fees.

The low take home pay can make a workplace injury or death devastating to a taxi driver's family. Like other independent contractors, a TDAA press release notes, Loiu was ineligible for workers compensation and uninsured by the franchise holder. The lack of coverage is particularly glaring given that driving a cab can be a particularly dangerous job. OSHA estimates the homicide rates for cabbies is 21-33% higher than the national average for workers. Currently, the Texas Civil Rights Project is involved with a lawsuit against the Austin Police Department and the city involving the case of a taxi driver who was assaulted after the APD commandeered his cab and ordered the driver to take the drunk and disorderly passenger home.

Even barring violence, the study notes health care can be prohibitive without insurance. Drivers like Loiu, who appears to have died of natural causes, rarely have life insurance protecting their families. TDAA believes that leaves workers vulnerable and that the taxi system is long due for change. TDAA President Dave Passmore commented, "We hope that the City of Austin will note the passing of Mr. Loiu and reconsider the system it has implemented that leaves its drivers so unprotected.”