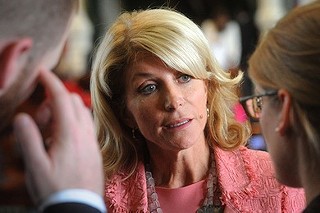 Wendy Davis strikes a pose, Steve Stockman sends in the clowns, and Tom Pauken gets the right stuff. Cacophony is on the News Ticker.

• Viewing a right wing list of CSCOPE's "top 20 lesson mistakes," we have to wonder if the entire witch hunt was hatched in a drably carpeted suburban basement, where a Robitussin-foggy Sen. Dan Patrick accidentally confused an airing of Red Dawn with Fox and Friends.

• We're sure there's some content in Konni Burton's new video attacking Sen. Wendy Davis, but we're too distracted by the candelabra flickering in the background. Pumpkin spice pillars? Really Konni? We would have expected tea lights.

• Speaking of Davis, the "stunning blonde" is profiled in the Vogue September issue. There we learn that former Mayor Will Wynn is "scruffy but handsome." Talk about an "organic local peach!"

• In further Wendy news, the draft movement is heating up. The next step for Davis is to comically run around the streets of London, occasionally stopping to don a stick-on goatee.

• The University of Virginia Center for Politics is rating Gov. Rick Perry as a third tier presidential candidate. He would be upset, but he can't seem to ever remember what third even means.

• Sen. John Cornyn wants everyone to know that his Google + Hangout will be totally casual. It will be just like when a forty year old narc shows up at your high school casually draping one strap of his backpack over his letter jacket. "Hey man," he'll say, "do you know where I can score some jazz cigarettes?"

• We're not sure why Rep. Steve Stockman would invite Missouri's foremost Obama-mocking clown to perform in Texas. It would seem he wouldn't want the competition.

• Sen. Ted Cruz will be in Austin next Thursday. It may be best to not go out after dusk.

• Meanwhile Ted's pater familias Rafael Cruz may have gone off of his meds.

• Texas gubernatorial candidate™ Tom Pauken is thus far running to the right of opponent and heir apparent Greg Abbott. Best we can tell, his main message is that Democrats have cooties.