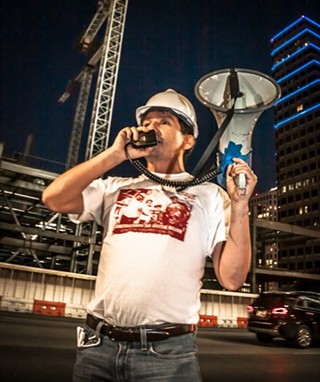 If you see a couple dozen people in the City Council chambers tomorrow wearing “I support White Lodging” tags, please note that some of them may have no idea why they’re there or why they’re wearing cheerful sticky buttons. But it beats mopping floors.

White Lodging is the Indiana-based hotel developer that runs a number of hotels in Austin and is spearheading the construction of the upscale JW Marriott at Congress and Second.

The hotel giant is on Thursday’s Council agenda because it’s challenging the city’s decision in June to rescind a $3.8 million fee waiver agreement based on evidence – and White Lodging’s own admission – that the developer wasn’t holding up its end of a 2011 agreement to pay prevailing wages to construction workers on the Marriott project. The agreement also stipulated that the city would pull the waivers if it failed to comply with the wage requirement.

Now, White Lodging wants Council to amend the agreed-upon ordinance to suit its financial needs. A hearing is set for 7pm (although Council time is always unpredictable), and a big showing is expected from both sides – construction workers and their most vocal advocate, the Workers Defense Project, on one side, and White Lodging and perhaps a slew of hotel workers wearing “I support White Lodging” stickers on the other.

Council was originally scheduled to consider this matter at its last meeting in June, before its month-long recess. That’s the day employees of all ranks from area White Lodging hotels were instructed to put on an “I support…” sticker and report to Council chambers. One employee, speaking in Spanish through a translator (Workers Defense Project’s Gregorio Casar), told the Chronicle that she was merely handed the campaign sticker and told to appear at a building she had never realized was City Hall. She gamely agreed and didn’t think much about it, she said, until Casar approached her and other Spanish-speaking employees and explained why White Lodging had wanted them in Council chambers that day.

The employee, who works as a hotel housekeeper and asked that she not be identified, said she wasn’t happy after realizing she was being used to help sway Council's vote on a wage fight involving construction workers. She has family members who are construction workers. “It’s so terrible,” she said, adding that her views are more aligned with other low-wage immigrant workers living in Austin.

How does she feel about the nearly $4 million break the city gave to her employer? They should use the money to give her a pay raise, she quipped. She talked about the Council experience and her job while sitting in the living room of a small, kid-filled apartment off of East Riverside, one of a few remaining affordable apartment complexes in an area that’s seen a sharp decrease in Latino immigrant families. Cheap, affordable multifamily complexes are getting torn down and replaced with condos or upscale apartments in keeping with a city planning vision to “upgrade” the East Riverside corridor.

As part of City Manager Marc Ott’s attempt to square things on the wage dispute, he has presented Council with several alternative wage structures to consider, including: paying workers an average rate based on the rates paid for all workers on the job site; pay an average wage rate and living wage, or pay a living wage of a minimum of $11 an hour. If there aren’t four votes on any of these options, then the original prevailing wage ordinance would presumably stand and construction workers would have something to celebrate.

The entire controversy over the hotel developer’s non-compliance is complicated by the fact that, two months after the 2011 Council vote, a former assistant city manager, Rudy Garza, gave White Lodging the okay to pay workers a “projected average rate” rather than the prevailing wage. In White Lodging's view, it was still following the "intent" of the ordinance without actually following the ordinance. City officials weren’t aware of the backroom agreement between Garza and White Lodging until this year, when construction workers started filing claims that they were getting cheated on pay.

The Workers Defense Project will join members of Austin Interfaith, Liveable City, and local unions at a rally Thursday on behalf of construction workers, 6pm, City Hall. From there they’ll march to the Marriott project at Second and Congress and then return to City Hall for the hearing.